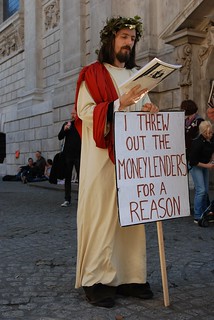 I threw out the moneylenders for a reason...
(Image by Ilias Bartolini)   Details   DMCA

Almost everyone is blaming the Greeks and their Government for corruption, lack of discipline and low productivity that precipitated their financial crisis. Although there is some validity to that statement, the truth is that Greece was mostly a hapless victim of uncouth moneylenders that acted in the same way that they have always acted: securing usurious returns on the money they lend to those in distress.

Today, this is happening at the level of countries rather than individuals. The moneylenders of yore lent money to distressed individuals to address their emergency needs when someone in a family needed expensive medical treatment or after a severe crop failure or other emergencies. When the time came to pay back, borrowers struggled to obtain the needed cash to satisfy the lenders demand for the money and the interest. If they did not have the cash, they were compelled to sell their furniture, mortgage their other possessions or in some cases even, historically, offer their children as slaves to satisfy the lender's demands. The lenders were often greedy, persistent and showed little or no empathy.

It does not matter if many Greeks cannot find jobs, cannot get their money from the banks, beg on the streets or go to bed hungry. Shakespeare described the moneylender best in the play 'The Merchant of Venice' where Shylock lent money to Antonio and setting the security at a pound of Antonio's flesh from next to his heart. Now, Greece is the poor Antonio of this world.

To set the blame for the present financial crisis on the Greek people and their Greek government will be like blaming the victims and not the criminals. Several years ago, Blankfein and his Goldman Sachs team helped Greece hide the true extent of its debt and in the process almost doubled it. Goldman Sachs also entered into derivates contracts with the Greek government, which allowed that government to securitize part of its debt in ways that European rules did not require to be reported. Greece was thus able to join the Euro-Zone because of those cooked books.

When Greece joined the Euro-zone, it adopted the Euro ( ) as its national currency, and agreed to abide by the Maastricht rules on debt and deficit ratios. These stipulate that no Euro-zone member may have a debt greater than 60% of its GDP or a budget deficit greater than 3% of it GDP. Goldman Sachs and the Greek government also negotiated a deal that allowed some of the debt to appear as a 'loan from Goldman Sachs not as a debt'. Furthermore, the deal did not use the prevailing exchange rate, but used a historical implied foreign exchange rate that allowed Greece to exchange its Yen and Dollars for a greater number of Euros. That helped Athens to meet Europe's deficit rules while continuing to spend beyond its means.

Many countries also suffered from financial crises similar to that of Greece under broadly similar circumstances. These include Russia in 1998, Uruguay in 2003, the Dominican Republic in 2005 and Ecuador in 2008. Argentina was nearly decimated by its financial crisis just few years ago. Paul Elliott Singer (known in the finance world as 'the Vulture') of NML, among others, offered Argentina Billions of dollars at a time when the Argentine economy was on its knees. When Argentina was unable to repay the debt, Singer and his cadre went to court everywhere including in the United States. They wanted more than 300% profit to settle their claims. The Argentine Financial Minister described them at the time, as 'judicial and financial vultures'. Finally, Argentina refused to pay and went into default. Although it has been difficult in Argentina, many experts now think the default was the best thing to happen to the Argentinians. After the banks opened up and the peso was devalued, Argentine products suddenly seemed cheap on the world market. Soybeans and wheat exports rose. The money started to pour back into Argentina.

If Golden Sachs did not play its dirty games, Greece would not be facing as difficult a crisis as it is facing now. It would still have its Drachma and its financial independence away from the Euro Zone. Unfortunately, Greece does not have its Dhachma and must submit to outside forces that will control its destiny. The pound of flesh is indeed close to the heart. In fact, Greece is losing its independence. This is the new form of imperialism imposed by the moneylenders.

Retired Pharmacologist with two masters and a Ph.D.
Related Topic(s): Corruption; Greek Politics; Jobs, Add Tags
Add to My Group(s)
Go To Commenting
The views expressed herein are the sole responsibility of the author and do not necessarily reflect those of this website or its editors.