This is the second in this occasional series of expanded Tweets of mine. My Twitter address, by the way, is: "thepolticaljunkies@tpjmagazine," tter.com/tpjmagazine.

1. (Feb. 26). Speaking of climate change denial (are you listening Scott Pruitt[?]) take a look at http://www.estatesatacqualina.com/ . There are some rich people who are really crazy, even when it comes to their money. This very expensive condo. development is right on the ocean at Miami Beach, FL. "What global warming? What, global warming? What, me worry? I'm rich." Well folks, that's rich! 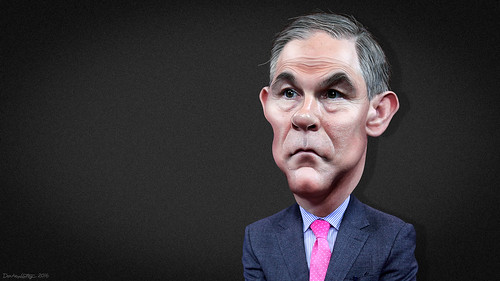 2. (Feb. 27). Jared Kushner had his security clearance downgraded. Good thing Trump doesn't need security clearance. With all of his foreign entanglements alone (forgetting about the bank stuff and female entanglements [? blackmail]) he couldn't get it. And, except for Trump giving it to him directly, given all of his own foreign entanglements, the new "National Security Advisor" John Bolton, otherwise known as the "In-house Warmonger-in-chief," probably couldn't get it either.) Oh, I forgot. Trump doesn't read the PDBs & other top-secret stuff anyway, so he doesn't need it.

3. (Feb. 28). "Mike Pence suggests that legal abortions could end in 'our time.'" If it weren't for Trump, Pence would be the most dangerous man in the U.S. He wants to criminalize all religious and non-religious beliefs about when life begins, other than his own, taking us back to the 16th century and the religious wars of that time. (See further, below, on Rick Santorum and Ross Douthat.)

4. (Mar. 3). Multiple choice: The real reason Jeff Sessions will not resign? A) Because he loves his job. B) Because he is totally loyal to Trump, no matter what the latter says about him. C) Because he really wants to get the "Drug War" going again, full blast. D) Because he knows that if he does, given his position with the Trump Campaign and Transition, knowing that he has already been interviewed by the Special Counsel's office several times, he would be subject to further investigation by Special Counsel. Odds on, it's "D," folks. Oh yes, Trump will not fire him, for that very same reason. 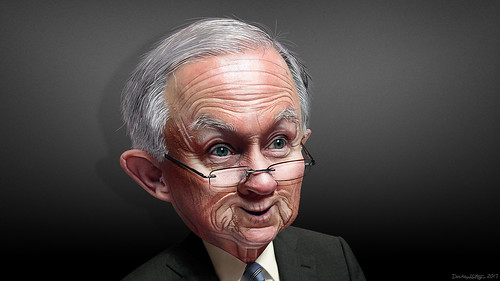 Poor Jeff. Just stuck in his job --- for he knows too much.
(Image by DonkeyHotey)   Details   DMCA

5. (Mar. 4). Jared is in a deep financial hole with the aptly named 666 Fifth Ave., NYC. https://www. nytimes.com/2018/03/01/opi nion/jared-kushner-donald-trump-nepotism.html ". Trump claims that he's worth $10 billion. If he is so rich, why doesn't he just bail out his son-in-law (and his daughter, Ivan-ka the Terrible, as a friend of mine recently labeled her, as well)?

6. (Mar. 6). Multiple choice: Why does Trump ignore Russian elec. meddling. A) Putin has "stuff" on him. B) The Russian money, legal (and ?illegal) in his businesses. C) It is now certain that Russian meddling did help him win. D) Perhaps most important now, Trump wantsRussian meddling in the 2018 elections to help the Repubs. maintain their Congressional majorities, to avoid his worst nightmare: Adam Schiff as Chair House Intel. Comm. E) All of above. E, of course.

7. (Mar. 7). Do you know why Hillary watches so much Fox"News?" Because it's the only national TV network that has its viewers believing that she is the President, and should be immediately locked up for ---- you name it. What she doesn't watch is the part that has her using her 30,000 emails in colluding with the Russians, Comey, and McCabe to win.

8. (Mar. 12). The "Identity Groups" that Democrats appeal to (and many commentators say they shouldn't do so because it's sooooo divisive) e.g.: pro-choicers, civil and gay rights folk, anti-Dominionists. That's BAD. "Damages the Party." When Repubs. appeal to their identity groups, like gunners, abortion criminalizers, gay rights deniers, xenophobes, and etc., they are just being Repubs.

9. (Mar. 13). From a friend, on today's news. Trump fires Tillerson by Twitter, while the President's "body man" is hustled out of the White House without his jacket, for unspecified "financial crimes." Did you ever think you'd be admiring the professionalism of the Saturday Night Massacre?

10. (Mar. 15). "God," we have been told by these men themselves, at various times told them to run for President: Scott Walker, Mike Huckabee, Rick Santorum, Tec Cruz, John Kasich, and Ben Carson. In terms of potential Repub. Presidents, "God" seems to have trouble making up his, her, its, or their mind. One thing these folk have in common, however, is that like Mike Pence (surely God has spoken to him too), they are all Dominionists of one stripe or another (as is, of course, their concept of "God" too).

11. (Mar. 15). Following up on the above, not to be left off "God's" list, the Dominionist Paula White confirmed that Trump had been chosen for his present job. Fascinating stuff. For if that is so, he, she, it, or they is a racist, misogynistic, Islamophobic, anti-Semitic (now there's a contradiction for you), homophobe.

12. (Mar. 21). Former CIA Director John Brennan said that the Russians"could have something on Trump." What? You think that Brennan doesn't know for sure that the Russians have "something," actually "somethings," on Trump and what they are? If he doesn't, the CIA surely was falling down on the job when he was Director. The big question is, who else knows?

13. (Mar. 22). John Dowd (whose previous claim to fame was keeping the greatest baseball hitter of all time, Pete Rose, out the Baseball Hall of Fame) resigning as Trump's lead lawyer for "Trump/Russia" tells you the next step you need to know about whether the Mueller investigation is for real or not. Dowd a) had an indefensible client, and b) didn't want to have to plead lawyer-client privilege to protect his client and perhaps himself from known criminality. (Of course, it could have been much deeper than that. Suppose that Dowd might have become complicit in criminal activity, on behalf of Trump, which possibility has now gotten Trump fixer Mike Cohen into such hot water.)

14. (Mar. 27). The Dominionist Rick Santorum wants to criminalize abortion "saving lives of the 'unborn.' " Ross Douthat of The Times, the "reasonable man's right-winger", weighed in on the same theme. On the matter of when life begins, they would criminalize the beliefs of all persons, religious and non-religious alike, that are not in accord with theirs. That is the height of religious authoritarianism, a policy that would impose this religious dogma on all the rest of us by the use of the criminal law, totally in violation of the Constitutional Doctrine of the Separation of Church and State and totally harmful to the delicate civil fabric of our society. People who believe that life begins at the moment of conception should not have or sanction abortions. They should not be allowed to criminally outlaw the beliefs of the rest of us. This would take us back to the period of the Religious Wars of the 16th and 17th centuries. Oh yes, as for saving the lives of schoolchildren, who everyone agrees are "alive," from death by gun, Santorum recommends teaching all schoolchildren CPR.

15. (April 8). Trump is finally going after Putin on the latest Syrian gas attacks (whoever actually carried them out). If Putin decides that he has been double-dealt (joining many other Trump dupes, over many a year) and drops the can on Trump, indirectly of course (say, via Wikileaks, which he has used before, or one of his many un-named trolls), what do Trump and his Minster of Propaganda, Sean Hannity, do? Scream "fake news" and a "deep state plot to unseat our duly elected President," of course. 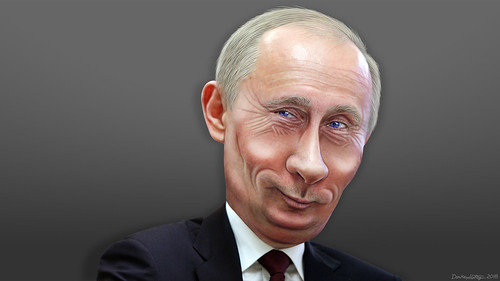 16. From Jason Farago, The New York Times: "[In New York City's] Jewish Museum's permanent collection display, I saw something I have never before seen in a historical museum: a screenshot of a Facebook post, presented with the same care and regard as centuries' worth of Judaica. The post features an image of a fat, sweaty banker, with a hooked nose and stars on his cuff links, gorging on delicacies while a starving fellow diner, labeled 'the people,' has only a bone to eat. The man who posted it is Heinz-Christian Strache: the leader of Austria's far-right Freedom Party and, since December, the country's vice chancellor [emphasis added]. A specter is haunting Europe today, and it [ain't the specter of communism.]" Please note that Strache is in the Austrian government. Have you heard any comment from the White House on this matter? I haven't. 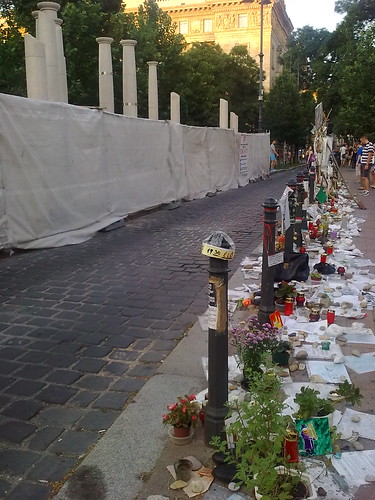 17. Viktor Orban has just been re-elected as Prime Minister of Hungary, with Austria formerly the (supposedly) co-equal member of the Austro-Hungarian Empire. With a promised 2/3rds majority in Parliament (the marginal votes supplied, by the way, by the Christian Democratic Party), Orban will be able to amend the Constitution to concentrate almost total power in his Office. A major target of Orban's re-election campaign was the Jewish Hungarian/U.S. financier/philanthropist, George Soros. From Roger Cohen, The New York Times, April 8, 2018: " '[D]anger is threatening us from the West,' Orban, said. 'This danger to us comes from politicians in Brussels, Berlin and Paris.' To counter it, the Hungarian prime minister has established a template: Neutralize an independent judiciary. Subjugate much of the media. Demonize migrants. Create loyal new elites through crony capitalism. Energize a national narrative of victimhood and heroism through the manipulation of historical memory. Claim the 'people's will' overrides constitutional checks and balances." Sound familiar?

Steven Jonas, MD, MPH, MS is a Professor Emeritus of Preventive Medicine at StonyBrookMedicine (NY) and author/co-author/editor/co-editor of over 35 books. In addition to his position on OpEdNews as a â€œTrusted Author,â€ he is a Senior (more...)
Related Topic(s): Abortion; Authoritarianism; Baseball; Climate; Denial; God; Money; Policy; Propaganda; Tweet; (more...) Twitter; Vladimir Putin; Wikileaks, Add Tags  (less...)
Add to My Group(s)
Go To Commenting
The views expressed herein are the sole responsibility of the author and do not necessarily reflect those of this website or its editors.