EXCERPTED FROM THE GUARDIAN UK: 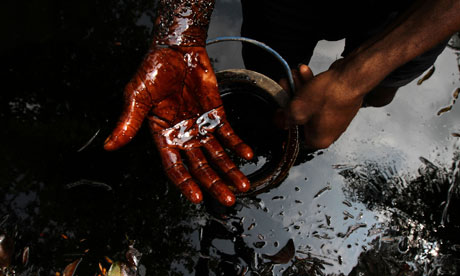 Shell has never denied that its oil operations have polluted large areas of the Niger Delta -- land and air. But it had resisted charges of complicity in human rights abuses.

Court documents now reveal that in the 1990s Shell routinely worked with Nigeria's military and mobile police to suppress resistance to its oil activities, often from activists in Ogoniland, in the delta region.

Confidential memos, faxes, witness statements and other documents, released in 2009, show the company regularly paid the military to stop the peaceful protest movement against the pollution, even helping to plan raids on villages suspected of opposing the company.

According to Ogoni activists, several thousand people were killed in the 1990s and many more fled that wave of terror that took place in the 1990s.

In 2009, in a New York federal court, that evidence never saw light during the trial. Shell had been accused of collaborating with the state in the execution in 1995 of writer Ken Saro-Wiwa and other leaders of the Ogoni tribe. Instead, Shell paid $15.5m ( -9.6m) to the eight families in settlement.

Among the documents was a 1994 letter from Shell agreeing to pay a unit of the Nigerian army to retrieve a truck, an action that left one Ogoni man dead and two wounded. Shell said it was making the payment "as a show of gratitude and motivation for a sustained favourable disposition in future assignments". (READ THE FULL ARTICLE HERE)

I am a student of history, religion, exoteric and esoteric, the Humanities in general and a tempered advocate for the ultimate manifestation of peace, justice and the unity of humankind through self-realization and mutual respect, although I am not (more...)
Related Topic(s): Abuse Of Power; Human Rights; Human Rights Watch; Military Assassinations; Military Corruption; Niger Nigeria; Nigeria; Oil Spills And Environmental Disasters; Pollution; Protester; (more...) Shell Oil, Add Tags  (less...)
Add to My Group(s)
Go To Commenting
The views expressed herein are the sole responsibility of the author and do not necessarily reflect those of this website or its editors.