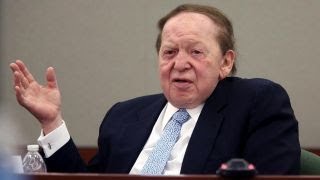 A lot of people are scratching their heads over Trump's recent moves distancing himself from Israel. He announced that he was pulling troops from Syria, thereby nettling Israel's friends who counted on him to take on Iran in Syria. Iran, Iran, Iran, say Chuck Schumer, Lindsey Graham, and Bret Stephens. Trump overrode John Bolton, his neoconservative national security adviser, in announcing the withdrawal. Jonathan Tobin writes that Trump just gave the finger to his Jewish voters.

Then Trump held a briefing in Iraq the night after Christmas and complained about all the money we give Israel, exaggerating the sum to $4.5 billion a year.

I think there's a simple explanation for Trump's shift. He was counting on his biggest donor, Sheldon Adelson, to deliver the House to him in the midterm elections; and Adelson failed, big time. Donald Trump is sore about that.

Remember that in the runup to the election last spring, the transactional president did his part: He tore up the Iran deal and moved the embassy to Jerusalem and installed Adelson's friend John Bolton as national security adviser after declining to do all these actions in his first year in office, he saved them for the election year.

What did Trump get for those moves? Bupkus. Yes Sheldon Adelson and his wife Miriam gave upwards of $87 million to the Republican congressional effort, including some $50 million to the Congressional Leadership Fund. More than half that money came in last May, just as the embassy was opened. All to save the House.

And what was the result? The Democrats picked up 40 seats in the House in what the media are calling a "blue tsunami." Democrats had a huge advantage in raw votes over Republicans. 61 million to 51 million votes, Democrats to Republicans in Congress. Many Dems are even talking about impeachment!

Adelson's ineffectiveness might be judged by his own state. The 85-year-old casino mogul and his wife gave some $20,000 specifically to a fundraising committee supporting Cresent Hardy, an incumbent Republican congressman in Nevada. Democrat Steve Horsford walloped Cresent Hardy 52 to 44 percent! In fact, three of four congresspeople from Nevada are Democrat.

The Democrats' sole win by a challenger over a Republican incumbent in the Senate was also Nevada: Jacky Rosen knocked off Republican Senator Dean Heller.

You don't think Trump noticed all this? Of course he did. Donald Trump is a shrewd man, and he has surely concluded what any gamer would, that Sheldon Adelson's millions didn't have the impact in 2018 that they did in 2016, when they helped deliver the White House. Hey, maybe Adelson should have given more for the embassy! He can afford it!

Well things change, and millions don't mean what they used to. And Trump is surely registering his displeasure.

Of course, come 2020, it's a whole new ballgame. But right now Trump is clearing the books.

P.S. Adelson's Birthright millions are also hemorrhaging -- young Jews are starting to see the free trip to Israel as toxic.

Philip Weiss is a longtime writer and journalist in New York. He co-edits a website on Israel/Palestine, Mondoweiss.net, which he founded in order to foster the movement for greater fairness and justice for Palestinians in American foreign policy. He is currently working on a novel about the US in Australia during WW2.
Related Topic(s): Losers; Midterm Elections; Money; Sheldon Adelson; Trump Anger, Add Tags
Add to My Group(s)
Go To Commenting
The views expressed herein are the sole responsibility of the author and do not necessarily reflect those of this website or its editors.