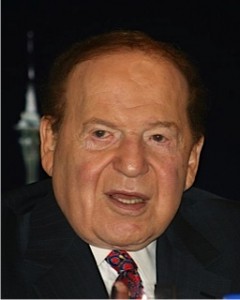 Copyrighted Image? DMCA
From the 1890s until finally outlawed by the Supreme Court some 50 years later, one device used in the segregated South to maintain the white power structure and to prevent blacks from any effective political role was called the white primary.

This was a sort of preliminary election, open only to white Democrats, that ostensibly was a nonofficial event not run by the state and thus did not adhere to laws and constitutional principles providing for equal treatment and universal voting rights. There would be a later official election in which blacks could vote, but it usually was meaningless because electoral contests had in effect already been decided in the white primary.

Now we have a procedure reminiscent of the white primary that is being called the "Sheldon primary," as in political bankroller Sheldon Adelson. Republican presidential hopefuls are kneeling at the feet of the casino magnate in the hope of receiving his blessing, and thus his money, as the party's nominee for 2016.

It seems that Adelson who, together with his wife, dropped $93 million on political campaigns in 2012, has concluded that he erred in that year in backing for too long candidates whose ideology appealed most to him but ultimately proved unelectable. This time he wants to anoint early on someone he can stick with right through the general election. He doesn't want to see messy primary contests that would weaken the eventual nominee.

If things work the way Adelson wants -- and that he is willing and able to pay to make them work that way -- caucuses in Iowa or the primary in New Hampshire will matter less than the Sheldon primary. Last time he let us have a good hard look at the likes of Newt Gingrich while votes in Republican primaries still meant something. Next time he doesn't want primary voters to have that much of a choice.

For this man who will likely have such enormous influence on who will be the Republican presidential nominee, the Republican Party isn't even his first love among political parties. That would be the Likud party. Adelson's money also plays a very big role in Israeli politics, much of it in subsidizing a free-distribution newspaper, Israel HaYom, which has the largest circulation of any daily newspaper in Israel and functions as a cheerleader for Benjamin Netanyahu and Likud.

Nor is the United States Adelson's first love among countries. He has said that when he performed military service as a young man it "unfortunately" was in a U.S. uniform rather than an Israeli one. He has expressed the wish that his son become a sniper in the Israeli Defense Forces.

Back in the United States, Adelson does have some unsurprising plutocratic impulses, but with a blatantly narrow focus. Perhaps when the objective is to advance the interests not only of the one percent, but of whatever small fraction of one percent that an estimated net worth of $38 billion makes a person a part of, narrowness is inevitable.

Adelson's biggest push for, and most lavish financing of, a domestic U.S. issue is his attempt to get online gambling outlawed. The ostensible purpose is to protect the morals of our youth, but of course it also would protect the market share of his casinos.

Adelson's most distinctive foreign policy pronouncement is that a nuclear weapon should be dropped on Iran.

The Sheldon primary is the sort of thing we get when the Supreme Court, an earlier incarnation of which eliminated the white primary, shreds efforts to limit the role of money in U.S. elections.

Even if that mistake cannot be corrected, voters -- including those Republican primary voters in New Hampshire and elsewhere -- ought at least to be fully aware of what type of man is trying to use his wealth to make their choice for them.

Paul R. Pillar, in his 28 years at the Central Intelligence Agency, rose to be one of the agency's top analysts. He is now a visiting professor at Georgetown University for security studies. (This article first appeared as a blog post at The National Interest's Web site. Reprinted with author's permission.)

Consortiumnews.com was founded by Robert Parry in 1995 as the first investigative news magazine on the Internet. The site was meant to be -- and has become -- a home for important, well-reported stories and a challenge to the inept but dominant (more...)
Related Topic(s): Primary Interference; Republican; Sheldon Adelson, Add Tags
Add to My Group(s)
Go To Commenting
The views expressed herein are the sole responsibility of the author and do not necessarily reflect those of this website or its editors.