If members of the Senate Finance Committee ask these questions of the seven pharmaceutical executives testifying this week on the Hill, they will probably hear, "because we can." 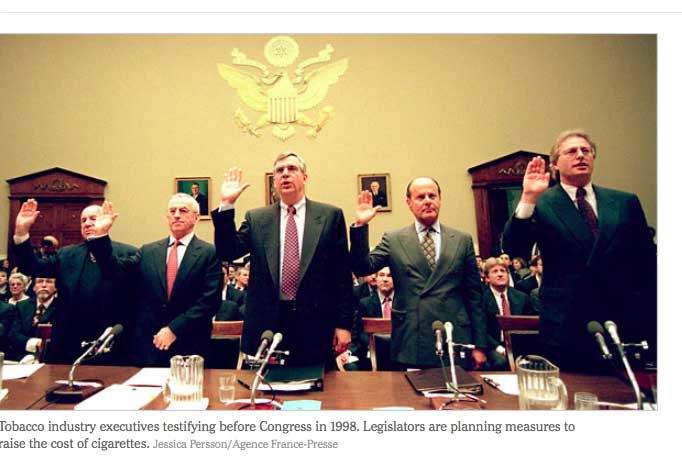 Pharma execs will appear this week on the Hill
(Image by dreamstime.com)   Details   DMCA

Pharma's shameless profit party is hard to miss. It began with TV ads for its most expensive drugs, segued into aggressive marketing of 5-digit injectable biologic drugs, and even had a stopover overseas where it tries to incorporate to duck U.S. taxes. Yes, the U.S. taxes it lives on.

Now, even Congress is crying uncle.

Pharma has two lobbyists for every member of Congress. It spends more on lobbying than tobacco, oil and defense contractors combined. The U.S. government is captured.

Want a chilling example? The CDC Foundation which receives millions from corporations (not that it affects policies or anything) lists as donors Abbott, AbbVie, Bayer, AstraZeneca, Merck, Pfizer, GlaxoSmithKline Biologicals, Eli Lilly, Amgen, Genentech, Gilead and many more. (Many speculate that is why the CDC allows its name to be used in Gilead ads for its megapriced Hep C drug?)

Until 2010, PhRMA, Pharma's top lobbying group, was headed by former Louisiana Rep. Billy Tauzin who resigned from Congress where he chaired the committee which oversees the drug industry only to immediately reappear as the leader of PhRMA where he drew a $2 million salary. No conflict of interest there.

Tauzin had played a key role in shepherding the Medicare Prescription Drug Bill through Congress which prohibited government negotiation of lower drug prices and Canadian imports. "It's a sad commentary on politics in Washington that a member of Congress who pushed through a major piece of legislation benefiting the drug industry, gets the job leading that industry," Public Citizen's President Joan Claybrook said.

Two-thirds of Pharma lobbyists previously worked for Congress or federal agencies reports the New York Times. An aide to the late former Michigan Rep. John D. Dingell now works for PhRMA, and an aide to former Iowa Sen. Tom Harkin, who was the chairman of the Senate health committee "is now a top lobbyist for Merck." Gary Andres, former staff director of the House Energy and Commerce Committee now lobbies for biotech companies. And the list goes on.

Having captured Congress, you wouldn't think Pharma needs a charm offensive. Yet it spends millions trying to convince the public it has our interests at heart as it raises our taxes and health care costs. Recently, "America's Biopharmaceutical companies" are running a "Go Boldly" campaign, ennobling their work with the pay-off line "here's to permission to fail."

Yes, Pharma knows a lot about "permission to fail." Over 20 of its drugs have been withdrawn from the market in recent years because they were so dangerous-after maximum money was made of course. They include Vioxx, Bextra, Baycol, Trovan, Meridia, Seldane, Hismanal, Darvon, Raxar, Redux Mylotarg, Lotronex, Propulsid, phenylpropanolamine (PPA), Prexige, phenacetin, Oraflex, Omniflox, Posicor, Serzone and Duract. Meanwhile Humira is the best-selling prescription drug in the world though its immune system suppression invites tuberculosis, lethal infections, melanoma, lymphoma, "unusual cancers in children and teenagers" and, in a recent report, leprosy. Will senators grill Richard Gonzalez, the C.E.O. of AbbVie, who makes Humira?

Pharma has gotten most of its extreme-priced drugs approved by parading "patients" in front of the FDA and insurance panels. What will happen when Pharma captains themselves are paraded in front of the Senate Finance Committee this week? Can this shameless industry be tamed?

Related Topic(s): Drug Cartels; Drug Companies- Marketing; Drug Policy-Culture-Laws; Drugs; Drugs Prescription; Pharmaceutical Industry; Pharmacy, Add Tags
Add to My Group(s)
Go To Commenting
The views expressed herein are the sole responsibility of the author and do not necessarily reflect those of this website or its editors.