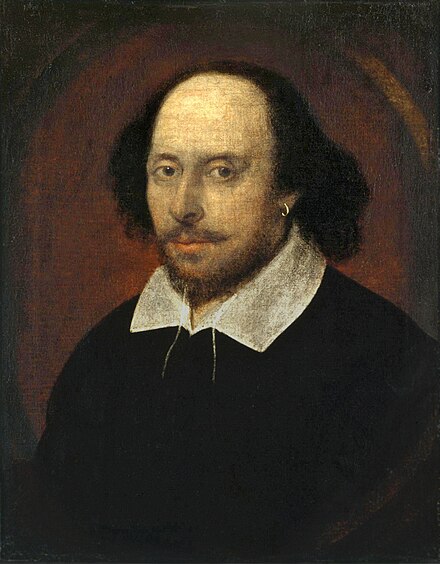 Of course, Shakespeare was a Christian. It was a crime to be otherwise in a time when church attendance was enforced by law. But whether he believed the supernatural dogmas remains a topic of debate.

Although there are few records of his life, Shakespeare undoubtedly received Anglican indoctrination as a schoolboy at Stratford, eighty miles northwest of London. All pupils were required to memorize and recite long segments of scripture.

Shakespeare married, but evidently left his wife and children behind in Stratford when he went to London in the 1590s. He began writing poetry, and became involved in theater, both as actor and playwright.

His plays contain references to God, as well as to ghosts, fairies and witches. What he personally believed seems impossible to learn. Obviously, Shakespeare did not share the beliefs of England's Puritans, who sought everywhere to stamp out play-acting and theater-going as wicked. For a time, he lived in the bawdy Bankside district of London, hotbed of prostitution and carousal; yet some researchers say Shakespeare lived more sedately than Christopher Marlowe, Ben Jonson and other theater colleagues.

Near his death, after Shakespeare had grown wealthy and returned to his family in Stratford, he wrote a traditional Christian testimonial into his last will. Authorities disagree over whether it was sincere, or a formality. A half-century after his death, an Oxford chaplain wrote that Shakespeare "died a papist" - but most scholars doubt this assertion. Perhaps, like many people, the bard wavered in matters of religion. A definite answer seems unknowable.

In Shakespeare's plays, believers tend to see evidence of faith, and skeptics signs of doubt. At the height of the Enlightenment, freethinker Joseph Ritson wrote that Shakespeare was free from "the reigning superstition of his time" and subscribed to no "temporary religion," neither "Papish or Protestant, Paganism or Christianity."

Atheistic philosopher George Santayana wrote an essay titled "Absence of Religion in Shakespeare," commenting on the bard's "strange insensibility to religion." Santayana said it is remarkable that "we should have to search through all the works of Shakespeare to find half a dozen passages that have so much as a religious sound, and that even these passages, upon examination, should prove not to be the expression of any deep religious conception." At another time, Santayana remarked: "For Shakespeare, in the matter of religion, the choice lay between Christianity and nothing. He chose nothing."

As for the meaning of life, in all his profound passages, Shakespeare never says that the purpose of human existence is to be saved by the mystical Jesus and go to heaven. Instead, in Macbeth's great lament (Act 5, Scene 5), he bitterly contends that each life proceeds to oblivion without ultimate meaning. The soliloquy is a classic of existentialism:

Creeps in this petty pace from day to day

Related Topic(s): Blasphemy; Conviction; Faith; Fools; Prosecution; Religion; Shakespeare, Add Tags
Add to My Group(s)
Go To Commenting
The views expressed herein are the sole responsibility of the author and do not necessarily reflect those of this website or its editors.