US Secretary of State Mike Pompeo knows the importance of rare earth elements, and North Korea has reportedly found one of the world's biggest deposits 150 km from Pyongyang; is this another factor behind the recent thaw with the US? 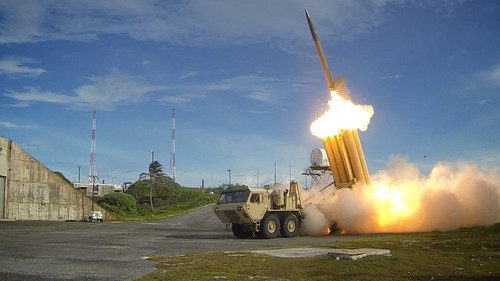 A THAAD missile system intercepts ballistic missiles during a test near the US in Sept 2013.
(Image by U.S. Missile Defense Agency)   Details   DMCA

This may not be about condos on North Korean beaches after all. Arguably, the heart of the matter in the Trump administration's embrace of Kim Jong-un has everything to do with one of the largest deposits of rare earth elements (REEs) in the world, located only 150 km northwest of Pyongyang and potentially worth billions of US dollars.

All the implements of 21st century technology-driven everyday life rely on the chemical and physical properties of 17 precious elements on the periodic chart also known as REEs.

Currently, China is believed to control over 95% of global production of rare earth metals, with an estimated 55 million tons in deposits. North Korea, for its part, holds at least 20 million tons.

Rare earth elements are not the only highly strategic minerals and metals in this power play. The same deposits are sources of tungsten, zirconium, titanium, hafnium, rhenium and molybdenum; all of these are absolutely critical not only for myriad military applications but also for nuclear power.

Rare earth metallurgy also happens to be essential for US, Russian and Chinese weapons systems. The THAAD system needs rare earth elements, and so do Russia's S-400 and S-500 missile defense systems.

It's not far-fetched to consider "The Art of the Deal" applied to rare earth elements. If the US does not attempt to make a serious play on the Democratic People's Republic of Korea's (DPRK's) allegedly vast rare earth resources, the winner, once again, may be Beijing. And Moscow as well -- considering the Russia-China strategic partnership, now explicitly recognized on the record.

The whole puzzle may revolve around who offers the best return on investment; not on real estate but sexy metal, with the Pyongyang leadership potentially able to collect an immense fortune.

Is Beijing capable of matching a possible American deal? This may well have been a key topic of discussion during the third meeting in only a few weeks between Kim Jong-un and President Xi Jinping, exactly when the entire geopolitical chessboard hangs in the balance.

So metals are not sexy?

Researcher Marc Sills, in a paper titled "Strategic Materials Crises and Great Power Conflicts," says: "Conflict over strategic minerals is inevitable. The dramas will likely unfold at or near the mines, or along the transportation lines the materials must travel, and especially at world's strategic choke points the US military is now generally tasked to control. Again, the power equation is written to include both control of possession and denial of possession by others."

This applies, for instance, to the Ukraine puzzle. Russia badly needs Ukraine's titanium, zirconium and hafnium for its industrial-military complex.

Earlier this year Japanese researchers discovered a deposit of 16 million tons of rare earth elements (less than the North Korean reserves) beneath the seabed in the Western Pacific. But that's unlikely to change China's -- and potentially the DPRK's -- prominence. The key in the whole rare earth element process is to devise a profitable production chain, as the Chinese have done. And that takes a long time.

Detailed papers such as "China's Rare Earth Elements Industry," by Cindy Hurst (2010), published by the Institute for the Analysis of Global Security (IAGS) or "Rare Earth in Selected US Defense Applications," by James Hedrick, presented at the 40th Forum on the Geology of Industrial Minerals in 2004, convincingly map all the connections. Sills stresses how minerals and metals, though, seem to attract attention only in mining trade publications: "And that would seem to explain in part why the REE contest in Korea has eluded attention. Metals just ain't that sexy. But weapons are."

Metals are certainly sexy for US Secretary of State Mike Pompeo. It's quite enlightening to remember how Pompeo, then CIA director, told a Senate Committee in May 2017 how foreign control of rare earth elements was "a very real concern."

Fast forward to one year later, when Pompeo, taking over at the State Department, emphasized a new "swagger" in US foreign policy.

Related Topic(s): Dprk; Korea; Mining; Pipeline; Rare Earth Elements; Weapons, Add Tags
Add to My Group(s)
Go To Commenting
The views expressed herein are the sole responsibility of the author and do not necessarily reflect those of this website or its editors.