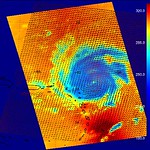 REASON #1: Consider the category 4 and 5 hurricanes that have developed in one season -- the intensity attributed to climate change. The latest, hurricane Maria devastated Dominica lost some of its force but still hit Puerto Rico as a category four -- the worst in living memory. About two weeks earlier, hurricane Irma flattened St. Maarten with 225 mph winds. Including Matthew last October, there have been three of category 5 strength within the period of a year.

REASON #2: Harvey had been downgraded below a tropical storm in the Atlantic. Unfortunately, the waters of the Gulf near the coast were 2.7 to 7.2 degrees F warmer than usual, and it regained strength returning to hurricane force. By the time it reached Houston, it had intensified to a category 4, the second most severe. Not only are waters warming but sea levels are rising exacerbating the effects of the storms -- the storm surge rears up over a higher sea level increasing the height of the flood waters.

The heartrending television coverage of Houston shows the tragedy of residents who have lost everything. Schools and universities are closed. Rescuers have arrived from far-away states to help, as among other things there is a shortage of boats to ferry stranded homeowners. Many had never been flooded ever before and figured they were on high enough ground to be safe. The ravages of hurricane Harvey and the record 50 inches of rain in its wake is the result of what is described as a 500-year event. The only trouble with that is there have now been three in the last three years. The rainfall almost doubles each time, and this is by far the worst.

REASON #3: One consequence of the increased frequency of extreme events is scientific scrutiny of the hydrological cycle. Just published in Science (August 11, pp. 588-90), the prestigious organ of the American Association for the Advancement of Science (AAAS), is research on a vast continental scale in Europe. The 46 authors are one measure of the scope of the work, which looks at flood timing changes. Never previously observed with smaller studies, the authors have been the first to identify a clear climate change signal. REASON #4: Look at what is happening in the Arctic. The plight of the polar bears, the pollution registered even in Arctic snow, the melting Arctic ice are just some of the symptoms. The latest Arctic Report Card released December 13, 2016 by the National Oceanic and Atmospheric Administration is peer-reviewed, and brings together the work of 61 scientists from 11 nations, and is key to tracking changes in the Arctic.

What is happening there is frightening. The region has experienced record-setting surface temperatures for three years in a row accelerating the ice and snow melt. In the past quarter-century it has lost two-thirds of the volume of sea ice as well as snow cover. The result is increased exposure of water to sunlight and greater absorption of heat, which in turn melts more ice and snow in a vicious cycle (Martin Jeffries, James Overland and Don Perovich, Physics Today, October 2013).

There is a really worrying photograph of the Arctic showing a large green patch in the middle. Green in the middle of the Arctic you ask yourself! The text explains what is happening. Ice cover is now so thin sunlight is able to penetrate through. That enables plankton to grow in the water below.

REASON #5: Look at the Antarctic. It, too, is not immune. Antarctica is featured in the July 2017National Geographic. Dramatic satellite photos show how a 225 square mile chunk of ice breaks off from the Pine Island ice shelf, which supports a massive glacier. A second rift is forming already.

REASON#6: Hear just about any scientist working in the field. Every major international scientific academy endorses it including the U.S. National Academy of Sciences. And the IPCC Fifth Assessment Report(2013) has enough detail to convince any rational skeptic -- no one can convince the nuts.

REASON#7: Look at the scientists who have been protesting. Thousands of them have marched to protest your administration's belittling of science. The demonstrations were planned for Earth Day to signal a particular concern with the enormity of current climate policy -- across the US and in hundreds of cities across the globe, more than 600 actions on every continent including Antarctica. Your irrational skepticism has them baffled and clearly worried.

Look at all the evidence and the logic for there is only a small window, which is closing rapidly. That is why the scientists were marching. Their discipline, resilient yet based on fact, theoretical yet based on empirical evidence, brings benefits to society as a whole. Their conscience forces them to march.

You don't fix your car yourself, do you? The experts know more. Please listen to them. It is the only way we can leave a habitable world for future generations.

Arshad M Khan is a former Professor. Educated at King's College London, Oklahoma State University and the University of Chicago, he has a multidisciplinary background that has frequently informed his research. He was elected a Fellow of the (more...)
Related Topic(s): Climate Change; Climate Crisis; Climate Gap; Climate Modeling; Climate Wars; Climate-change Exit Strategy; Trump Against Climate Change; Trump Protesters, Add Tags
Add to My Group(s)
Go To Commenting
The views expressed herein are the sole responsibility of the author and do not necessarily reflect those of this website or its editors.