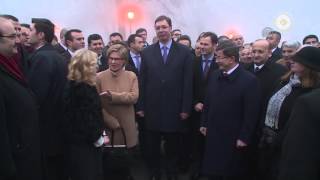 As the EU seeks to increase its influence in the Balkans, Russia and Turkey have been working hard to strengthen their own ties to the region. The EU's renewed interest in its southern backyard has been prompted by fears of Moscow's mounting impact in the Balkans. Although Russia's closest European ally is Serbia, it is not the only country with a long history in the Balkans. Turkey is another heavyweight, gaining huge support from corrupted officials throughout the Balkans. Like Russia, Turkey is investing in major national projects strategically calculated to have the greatest economic and political impact on the financial market.

To demonstrate his commitment to Serbia, in a joint news conference held on May 7 in Ankara with Serbia's president Aleksandar Vucic, Erdogan said that the target for 2018 is $2 billion, going to $5 billion in the long term. Among the biggest projects, the Belgrade-Sarajevo highway will strengthen regional and economic ties. Vucic thanked Erdogan for "stabilizing" the Balkans, declaring that "Turkey is the biggest power, the strongest country in the Balkans."

On May 17, during the EU-Western Balkans Summit held in Bulgaria, European leaders expressed their concern over Turkey's and Russia's expanding influence in the Balkans, particularly since the Balkans were once part of the Ottoman Empire, and subsequently under the Soviet Union. Erdogan has made his unscrupulous position clear to Western powers, stressing that Turkey will become as powerful and influential as the Ottoman Empire was during its heyday.

Russia considers Serbia its most trusted ally in Europe and is investing heavily in large projects, especially in the energy sector. Even though Vucic recognizes that he is receiving substantial support from Putin, he is strengthening his alliance with Turkey as well. While Russia and Turkey are competing for influence in Serbia, they are still collaborating because of their joint opposition to the EU's continuing and extensive involvement in the Balkans.

Vucic seeks to join the EU and build a trilateral relationship with Russia and Turkey, which directly challenges Western values and interests. Vucic, however, cannot "dance" in two weddings at the same time. His anti-Western alliance triggered alarm bells in the European Union. French President Emmanuel Macron put Ankara and Moscow in the same light, saying that he did not want "a Balkans that turns toward Turkey or Russia."

The European Union is still Serbia's largest trading partner; however, Serbia is heavily dependent on Russia for military equipment, which in many ways defines Russian-Serbian relations. There are approximately 1,000 companies in Serbia owned partially or entirely by Russians, with an estimated revenue of 5 billion Euros. In October 2017, Serbia bought six Russian fighter jets.

Surveys show that most Serbs are pro-Russian and regard NATO unfavorably. They remember well that Western powers heavily bombed their country in 1999 during the war with Kosovo. In a visit last year to Belgrade, Dmitry Rogozin, Russia's deputy prime minister, asserted that "Serbia will never join the EU."

The EU and US are aware that Serbia is still the "black sheep" in the Western Balkans, having Russia watching its back. The EU simply rejects what Russia's President Putin is doing in Serbia and does not expect Erdogan to change his dictatorial style as long as he and his AK Party are in power, as neither are consistent with the socio-political culture of the West.

In a conversation we had with Veran Matic, founder and director of Belgrade's Radio and Television station B92, he said that Vucic is certainly interested in establishing good relations between Serbia and Russia. He added that Serbia wants to be connected to the Turkish Stream pipeline (as Serbia depends on Russian gas, but there is no possibility of having it delivered directly to Serbia).

"For Serbia," Matic said, "investments are greatly significant, but on the other hand, we are concerned about having too good relations with the system that is recognized as a global media freedom impostor, and with a state which imprisoned the largest number of journalists worldwide."

In discussion with Xhemal Ahmeti, historian and philosopher, he said that the frequent meetings between Iran-Turkey-Russia, followed by activities in the regions where they operate, clearly reveal the contours of their cooperation both in the Middle East and in the Balkans. "These two powers," he said, "have agreed on their sphere of influence working on their agenda against their common enemy, the United States."

"The so-called Shiite Semitic doctrine, Putin's pan-Slavism, and Erdogan's neo-Ottomans have devised an alliance against the EU's strategic agenda now operating in the Balkans", said Ahmeti. Meanwhile, Serbia has managed to have it both ways, looking simultaneously at the East and West.

While recognition of Kosovo's independence remains the EU's key condition for Serbia's membership, Elena Guskova, from the Institute for Balkan Studies in the Russian Academy in Moscow, argues that cooperating with the Russian military is "a guarantee of safety" for many Serbs.

Related Topic(s): European Union; NATO; Russia And Turkey; Serbia, Add Tags
Add to My Group(s)
Go To Commenting
The views expressed herein are the sole responsibility of the author and do not necessarily reflect those of this website or its editors.