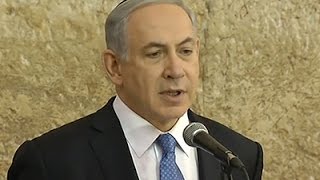 It declares that all the existing organizations of Mizrahim (Oriental Jews) are phony. That they are all instruments of the Ashkenazi (European Jewish) elite to keep the Mizrahim in subjugation. That the Oriental Shas party is a joke, especially since the death of Rabbi Ovadia Josef, who was an authentic Mizrahi leader.

It says the Likud is the most cunning instrument for keeping the Mizrahim down. That the endless rule of Binyamin Netanyahu, the very personification of the Ashkenazi elite, symbolizes the powerlessness of the ignorant Mizrahi masses, who keep him and his entire Ashkenazi gang in power.

SO a new Mizrahi party is set up, led by energetic young people who put forward a shocking revolutionary idea: separation.

Their plan is to partition the State of Israel along the Jaffa -- Jerusalem road, dividing the country into two halves. Everything north of the dividing line will remain the property of the Ashkenazis, everything south of it will become the new sovereign Mizrahi state, to be called Medinat Mizrah.

From there, your imagination can lead you anywhere you want.

WHERE WOULD I stand in such a situation? Asking myself seriously, I find myself in a very ambiguous situation.

I am an Ashkenazi. As Ashkenazi as you get. I was born in Germany. My family had been there for ages. But I never defined myself as such. The very idea of being "Ashkenazi" is completely alien to me.

More so, I have a very deep attachment to the Mizrahi society. I had it even before four young recruits from Morocco risked their young lives to save my life in the 1948 war. I was attached to Oriental culture from early childhood.

So, confronted with a vigorous Oriental separation movement, where would I stand? Frankly, I do not know. I certainly would not send the Israeli army and police to put it down. That would be impossible anyhow, considering that most soldiers and police are themselves Mizrahim.

Fortunately, the whole idea is preposterous. Can't happen. Even less than Kurdish or Catalonian separation.

CURIOUSLY ENOUGH, the Kurds and the Catalans are two peoples I have always liked.

I don't know when I started to like the Kurds or why. In my youth, Kurds were considered nice but primitive. The saying "Ana Kurdi" (Arabic for "I am a Kurd") meant that I am a simple person who fulfills his task without asking questions.

Related Topic(s): Israel; Knesset, Add Tags
Add to My Group(s)
Go To Commenting
The views expressed herein are the sole responsibility of the author and do not necessarily reflect those of this website or its editors.