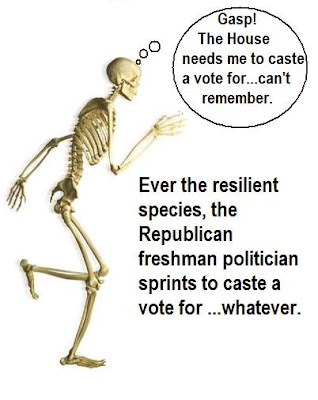 "I was just getting the hang of it some, but with all the slightly unfavorable publicity I've been getting the last few days, I'll never be an effective lawmaker," Harty wrote. "So I hereby submit my resignation from the House. Sorry my big mouth caused this furor."

Martin Harty was the Republican New Hampshire state freshman representative who, 91 years old, never held a public position before. He will probably never hold one again. That "slightly unfavorable publicity" comment is the understatement of the year: he "jokingly" told a community healthcare manager that the disabled and the mentally ill should be shipped off to Siberia.

Think Progress: Barrington Republican Martin Harty told Sharon Omand, a Strafford resident who manages a community mental health program, that "the world is too populated" and there are "too many defective people," according to an e-mail account of the conversation by Omand. [...] Harty confirmed to the Monitor that he made the comments to Omand.

"I wish we had a Siberia so we could ship them all off to freeze to death and die and clean up the population...Hitler did something right, and I agree with (it)."

Of course, the comments became viral within minutes, prompted Republican lawmakers to wince and immediately chorus "no comment."

Subsequent media coverage: The Concord Monitor (unfortunately) was able to get in touch with Harty for a sponse. Harty said nature has a way of "getting rid of stupid people," and "now we're saving everyone who gets born."

Pro-lifers are now busy distancing themselves from Harty and proposing he's so senile, he has no clue as to what he's saying. This was not good. Pat Robertson pissed off a multitude of Christians with his Haiti-contract-with-the-devil comments. They tried to cover it all up with a kind of senility defense, but it didn't work.

It was Marty Harty's 2008 statements for which he got elected:

Answer: Who's going to pick the apples?

Rev. Dan Vojir is has been writing/blogging on religion and politics for the better part of ten years. A former radio talk show host (Strictly Books " Talk America Radio Network) and book publisher, Dan has connected with some of the most (more...)
Related Topic(s): Cruelty; Humanitarian; New Hampshire; Publicity; Republican GOP Dirty Tricks; Republican Scandals; Senility; Welfare, Add Tags
Add to My Group(s)
Go To Commenting
The views expressed herein are the sole responsibility of the author and do not necessarily reflect those of this website or its editors.