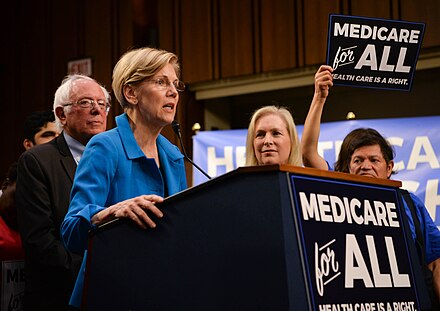 When I first saw Senator Warren refuse to acknowledge that Medicare for All will mean higher taxes, I admired her political skills, but as an economist, I was annoyed at her evasion of an obvious truth. However, on further thought, I realize that she is exactly right and is doing a public service with her simple insistence that costs for most people will go down.

It is true that many people hate taxes and find the idea that they would ever have to pay more for taxes for anything repugnant. But that group is far from a majority of the electorate. Most people approach their tax bill as any rational person would. They want to know what they are getting for their money.

This is why Warren is giving the right answer even though it is angering reporters and political pundits. She is talking about what actually matters to most voters; what will they get for their money?

The reporters are determined to make this a "she will raise your taxes story." This is an absurd narrowing of the issue. There is no reason that Warren should cooperate with their silly game. She is determined to talk about the substance of the issue, whether or not the reporters want to hear it.

For a larger context, consider how the budget is reported. Reporters routinely highlight the budget deficit and the accumulated debt, as though this is the most important feature of the budget. It is at least implicit in nearly all reporting that the country would be better off with a lower budget deficit.

This is also indicated in their choice of sources. An incredibly high percentage of budget stories in leading news outlets (i.e., the New York Times, Washington Post, and National Public Radio) feature comments from Committee for a Responsible Federal Budget, an organization committed to lower deficits and debt.

News stories on the budget almost never present the countervailing view, which is endorsed by a growing number of economists, that the budget deficit has generally been too small in the years following the Great Recession. The result has been that growth has been slower than it otherwise would have been, causing workers to be needlessly unemployed.

Furthermore, there is now considerable research on the concept of "hysteresis," which means that there are lasting effects of a period of slow growth and high unemployment. The logic is that many of the people who go unemployed for long periods of time lose skills and may end up being permanently unemployed. In addition, less growth will typically mean less investment. This lost investment means the economy will be less productive in the future. Furthermore, there is even a generational impact, since we know the children of unemployed parent(s) are likely to have poorer educational prospects and therefore worse labor market prospects when they grow up.

Instead of the debt and deficit posing a generational burden on our children, as the conventional story has it, the opposite is true. The failure to run deficits that are large enough to push the economy to full employment leaves the country, and our children, poorer than they otherwise would be.

While certainly a large minority, if not an actual majority, of economists would hold this viewpoint, this sort of argument is virtually invisible from budget reporting. These stories will almost never feature even a single voice suggesting that an insufficiently large deficit is slowing growth and needlessly raising unemployment.

Reporters seem to feel that if they have reported the size of the deficit and gotten the requisite complaints from the licensed deficit hawks, they have done their job. Why should Senator Warren feel obligated to play this game?

But it gets worse. Budget reporters never report on the size of the future rents that result from government-granted patent and copyright monopolies. If you're missing the connection, then you've been reading too much reporting and doing too little thinking about how the government creates liabilities for the future.

The government grants patent and copyright monopolies, as an alternative to direct spending, in order to achieve public goals. To take the most obvious one, the government grants patent monopolies to drug companies in order to give them an incentive to develop new drugs. This particular monopoly costs us close to $400 billion annually (1.8 percent of GDP) in higher drug prices, since we are forced to pay monopoly prices rather than the free market prices.

Dr. Dean Baker is a macroeconomist and Co-Director of the Center for Economic and Policy Research in Washington, D.C. He previously worked as a senior economist at the Economic Policy Institute and an assistant professor at Bucknell University. (more...)
Related Topic(s): Deficit; Medicare For All; Reporters; Senator Elizabeth Warren; Taxes, Add Tags
Add to My Group(s)
Go To Commenting
The views expressed herein are the sole responsibility of the author and do not necessarily reflect those of this website or its editors.