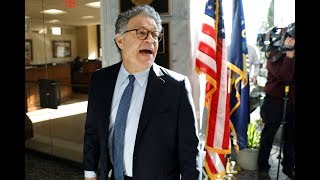 I am writing to urge you to reconsider the decision you recently announced to resign your duly elected U.S. Senate seat.

While confronting sexual harassment is strongly supported by a vast majority of Democrats and Progressives, the perception widely held among them is that you have been targeted for political ends, and it is a deeply troubling concern.

I would recommend that you and your Democratic Senate colleagues take a moment to review the petition on Change.org urging you not to resign. It now has over 72,000 signatures. Specifically, note the number and names of women who have chosen to stand on your behalf.

It is, as you said, ironic indeed that you have come under intense pressure to resign while the president and Republican members of Congress rallied around Roy Moore, turning a conveniently blind eye to the mind-boggling implications that would have resulted from caucusing with a known child predator.

The allegations against you, on the other hand, seem custom-made to cast you in a light that would encourage sexual harassment reform advocates within your own party to oppose you. The only complaint that had real substance, however, was the first one, made by Leeann Tweeden -- and Tweeden's association with Fox News' right-wing provocateur Sean Hannity alone should cast significant doubt on her motives.

Of the other allegations there just isn't much grist. In total, four of the other six accusers remain anonymous, and in the other two cases, the photographic evidence presented does more to vindicate you than validate the allegations against you.

Your Democratic colleagues in the Senate, in calling for your resignation, appear to be acting with genuine concern and good intentions. Sexual harassment in the workplace affects millions of Americans in a myriad of venues throughout our country. It is and always has been a cancer within our society. It must stop.

There is at the same time an unavoidable political component to all things Congressional. The dynamics of the special Senate election in Alabama unsurprisingly created a highly charged and divisive atmosphere. There seems to have been some strategic maneuvering on the part of Senate Democrats in dealing with the appalling allegations against Roy Moore and the outrageous conduct of Donald Trump. To an extent, you may be facing greater scrutiny than these allegations taken on their merits justify, due to the current climate.

You are the duly elected U.S. Senate representative of the people of the state of Minnesota, based on your commitment to pursue an agenda they support. You owe it to the Minnesotans who sent you to Washington to see that mission through.

Hold that seat and do their will.

Related Topic(s): Franken-Al; Open Letter; Resignation; Senate, Add Tags
Add to My Group(s)
Go To Commenting
The views expressed herein are the sole responsibility of the author and do not necessarily reflect those of this website or its editors.