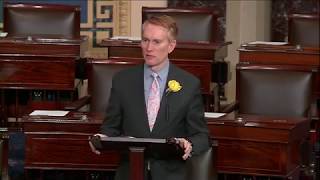 Oklahoma's Senator Lankford: "This administration is trying to use tariffs to solve every problem but HIV and climate change."

These are unprecedented GOP Senatorial objections to Trump's plans for "National Emergency 2" to result in an up-to-25% punitive tariff, the most cockeyed boondoggle concepts by him so far with devastating economic repercussions for our neighbor. I gratified as a Democrat to see this from the stalwart and normally most reactionary of the Senate Republicans~ so could this turn into some kind of weird "back flip into bipartisanship"?

Tuesday, two Trump administration officials put forth Trump's view: There is a crisis at the border and Mexico needs to stem the surge of migrants to avoid the new levies.

Trump is in completely uncharted territory with his threats to use unilateral tariff authority, and Republicans are clearly totally confused about how the tariffs would be applied and the underlying legal reasoning behind them.

Senate Majority Leader Mitch McConnell (R-Ky.) told reporters the party spent "almost our entire lunch" in a discussion with the administration, warning "there is not much support in my conference for tariffs, that's for sure."

Sen. James Lankford (R-Okla.): The administration "is trying to use tariffs to solve every problem but HIV and climate change."

Sen. Ron Johnson (R-Wis.) told the administration officials that they could not count on the same level of support this time, according to two sources familiar with the meeting. "The administration ought to be concerned about another vote of disapproval on another national emergency act, this time trying to implement tariffs. Tariffs are not real popular in the Republican Conference," Johnson, who backed Trump's first national emergency, told reporters afterward. "This would be a different vote. " This would certainly give me great pause."

Sen. Kevin Cramer of North Dakota, Trump ally, said "a lot of Republican members of the Senate are tariff weary. It's like, anything but tariffs." He said he could envision 20 Republicans opposing the president on the Senate floor if it came to that. "The president has to consider whether or not a veto can be sustained. That would be a really good, important discussion for him to have with Republican members of Congress before going that route"; Cramer has been sympathetic to Trump and said lawmakers should pressure Mexican officials to avoid the political and economic calamity.

Sen. Mitt Romney (R-Utah): "When it comes to applying a tariff to Mexico, I for one would not support that. I do not favor tariffs being applied to friends like Mexico. If there's a vote I think it's a very difficult vote for those of us who oppose tariffs. I would not be inclined to vote [for] a tariff against a friend."

Sen. John Kennedy (R-La.): "No," said on whether the White House had laid out a clear path forward. "Both bright guys, but they don't have decision-making authority. What I'm hoping we can do is when the president gets back from the U.K. we can all sit down and try to figure out how to move forward together."

Sen. John Cornyn (R-Texas): "The problem is we didn't have the decision makers there. The president and half his Cabinet [are] over in Europe, and obviously the clock is ticking. Time's wasting," Cornyn said. "What we need to do is get in front of the president and have that conversation." Kennedy is one of a handful of Republicans who have spoken to Trump directly about the tariffs, along with Sen. Joni Ernst (R-Iowa). Both said Trump seems unmoved.

While there have been a dozen or so moderate Republicans willing to buck the president on issues like the emergency declaration on the wall, even lawmakers who vehemently oppose Trump's tariffs believe there is little to no chance that enough GOP lawmakers would vote to override a presidential veto. In the immediate term, Republicans want to avoid all that. This week, Mexican officials are engaging in breakneck talks with the administration in advance of Trump's self-imposed June 10 deadline for new tariffs. They certainly don't want an ugly clash on the Senate Floor.

Sen. Mike Braun (R-Ind.): "The main takeaway would be that there's not much interest in using a tariff for border security. The legal thing came up and no one had an answer for that. But I think it's secondary because I don't think there's a lot of interest within the Senate for a 5 percent tariff to be used for that purpose."

Officials did not say what Trump will do and how he will do it, frustrating Republicans given that Trump has said he would make the decision in less than a week. If Trump tries to move under the first national emergency declaration, he could face a vote in September that blocks both his unilateral move for wall funds and new tariffs. If he declares a new one, he could set up rolling votes to block each emergency every six months if he leaves them in place.