Cross-posted from Campaign For America's Future 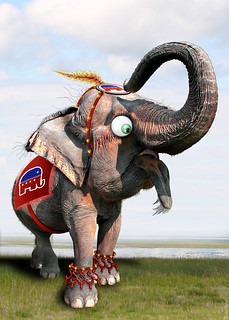 Republicans in the Senate on Monday unanimously filibustered the Paycheck Fairness Act. Did you see this on the news? Did you hear about it on the radio? Did you read about it in your local paper? There is an election coming and accurate, objective information is essential for democracy to function.

The Paycheck Fairness Act "amends the portion of the Fair Labor Standards Act of 1938 (FLSA) known as the Equal Pay Act to revise remedies for, enforcement of, and exceptions to prohibitions against sex discrimination in the payment of wages." It "revises the exception to the prohibition for a wage rate differential based on any other factor other than sex. Limits such factors to bona fide factors, such as education, training, or experience."

To sum up, it would put in place measures to ensure that women will be paid the same as men if they do the same work.

The vote was 52-40 in favor, but it was killed because it was filibustered by Republicans. Among the few outlets that even bothered to report that the bill was before the Senate, few reported that there was a Republican filibuster to kill the effort.

What Information Do Voters Get To Help Them Decide?

Politico at least reported that there was a vote: "Senate blocks pay equity bill." "Senate Republicans rejected a measure written by Senate Democrats aimed at bridging differences in pay between men and women.

The Paycheck Fairness Act fell short 52-40, failing to clear a 60-vote procedural vote hurdle on Monday evening, the third time the measure has failed since spring of 2012."

So women should be angry at "the Senate"? It "failed to clear" a "procedural vote hurdle."

What information do voters get from this, to help them decide who to vote for and against?

But wait, it gets better. After April's Republican filibuster of this bill Politico had the headline: "Senate GOP blocks pay equity bill." This time they took out "GOP."

The Hill: "Senate GOP blocks Paycheck Fairness Act for the second time" (Actually it was the fourth time. See Feministing: "For the 4th time, Senate Republicans vote against equal pay.")

Related Topic(s): Filibuster; Republican Hypocrisy; Republican Party Of No; Women Discrimination; Women Equal Pay, Add Tags
Add to My Group(s)
Go To Commenting
The views expressed herein are the sole responsibility of the author and do not necessarily reflect those of this website or its editors.