Will you examine the sexual impropriety allegations against Judge Kavanaugh? Will you join the # Me Too -- Delay Kavanaugh Confirmation? 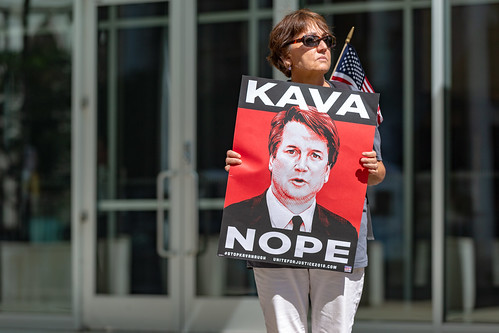 September 16, 2018 Kavanaugh's accuser came forward." Christine Blasey Ford, a professor at Palo Alto University in California, told The Washington Post that she had feared Kavanaugh "might inadvertently kill" her as he held her down and groped her while they were both high school students around 1982."

Will members of the Senate Judicial Committee from both sides of the aisle now acknowledge that Kavanaugh's confirmation hearing should be put on an unlimited hold until a thorough investigation has been completed?

Apparently not, "... Taylor Foy, a spokeswoman for Judiciary Committee Chairman Chuck Grassley (R-Iowa), on Sunday termed "disturbing" the timing of "uncorroborated allegations from more than 35 years ago, during high school."

Foy said that if Feinstein and other committee Democrats "took this claim seriously, they should have brought it to the full committee's attention much earlier..."

Do you find this unconscionable?

Nearly two weeks ago the Senate Judicial Committee hearings on Brett Kavanaugh made four days of great political theater. Lots of seemingly tough questions were asked" none were answered candidly.

Shortly before hearings commenced, Republicans dumped over 42,000 documents for committee review. Lots of other documents were not available at all.

It's virtually a foregone conclusion Republicans will approve Kavanaugh This despite the fact "" Kavanaugh's public approval is among the lowest for any nominee since it {Gallup} first started tracking in 1987.

Democrats are slightly different. They're not perfect by any means. Let's face it, had the DNC not screwed around, Senator Bernie Sanders might very well have received the Democratic Presidential nomination and gone on to triumph over Donald Trump.

Related Topic(s): Democrats Winning Back The United States Senate; Senate Judiciary; Senate Judiciary Committee, Add Tags
Add to My Group(s)
Go To Commenting
The views expressed herein are the sole responsibility of the author and do not necessarily reflect those of this website or its editors.

STAY IN THE KNOW
If you've enjoyed this, sign up for our daily or weekly newsletter to get lots of great progressive content.
Series: "Supreme Court Nominations"