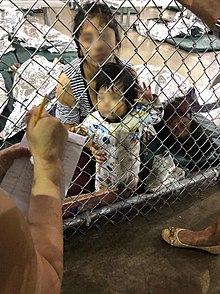 The Trump administration is moving to indefinitely detain migrant children and their families, reversing decades of U.S. policy. The Department of Homeland Security and the Department of Health and Human Services is expected to issue a new rule today to withdraw from a 1997 federal court settlement known as the Flores agreement, which put a 20-day limit on migrant family detentions. We speak with Democratic Senator Jeff Merkley, who made headlines last year when he was barred from entering an old Walmart where the government was detaining about 1,500 immigrant children in Brownsville, Texas.
Transcript

AMY GOODMAN: The Trump administration is moving to indefinitely detain migrant children and their families, reversing decades of U.S. policy. The Department of Homeland Security and the Department of Health and Human Services is expected to issue a new rule today to withdraw from a 1997 federal court settlement known as the Flores agreement, which put a 20-day limit on migrant family detentions. If the administration's new rule goes into effect, migrant children could be jailed for months, and even years, while their immigration cases are heard. On Wednesday, acting Homeland Security Secretary Kevin McAleenan said the new rule would serve as a deterrent to keep immigrants from coming to the United States.

ACTING DHS SECRETARY KEVIN McALEENAN: No child should be a pawn in a scheme to manipulate our immigration system, which is why the new rule eliminates the incentive to exploit children as a free ticket, or, as one gentleman in Guatemala told me, a passport for migration to the United States.

AMY GOODMAN: The proposed rule change has drawn intense condemnation from immigrant rights groups and human rights organizations. Amnesty International tweeted, "This is more than cruel. It's beyond logic and humanity," they said.

We're joined today by Democratic Senator Jeff Merkley of Oregon, who has become a leading critic of Trump's immigration policy. Last year, he made headlines after he was barred from entering an old Walmart where the government was detaining around 1,500 immigrant children in Brownsville, Texas. Senator Merkley writes about the experience in a new book, America Is Better Than This: Trump's War Against Migrant Families.

Senator Merkley, welcome to Democracy Now! It's great to have you with us.

SEN. JEFF MERKLEY: Thank you. Great to be with you, Amy.

AMY GOODMAN: Congratulations on your first book. I want to go to what's happening today, the Flores agreement and the Trump administration saying they're going to end it. Explain what this means and what you plan to do about it as a U.S. senator.

SEN. JEFF MERKLEY: Well, the Flores settlement agreement is about basic rules for treating children decently, in a humanitarian style, meaning nutrition, healthcare, just the ability to have bedding and hygiene. It's just the basics of how you would want anyone treated. And this administration has absolutely been inflicting trauma on children as a strategy to deter immigration. And such a strategy goes in direct conflict with the Flores agreement. So, here is the president of the United States a few weeks ago saying we're not going to let kids outside to play soccer, then saying we're not going to give flu shots, even though three refugee children have died of flu, and flu can move very quickly through those very crowded holding cells. This is an administration that appealed a rule that you had to provide soap and bedding to children.

AMY GOODMAN: And toothbrushes and toothpaste.

SEN. JEFF MERKLEY: And toothbrushes. I mean, the idea that you're going to force children to sleep on very cold holding cells' concrete floors, lights on all at night, and then proceed to ship them through a gulag, basically child prisons. They had 15,000 migrant children held in these facilities in December of last year. It's a shocking development for America to be in the business of deliberately harming children. And that's why we have to fight it.

So, here we have the Flores agreement, and the administration says, "Well, we want to make sure we can imprison children indefinitely." And I just think, "Who in the world says we want to imprison children indefinitely?" And they want to be outside of state licensing, and they want to be outside of state supervision. And we know where they're headed when they're outside of supervision, because they've demonstrated it time and time again. So, that is why this is so important. The key piece is that Flores says you can only hold children in a non-state-licensed facility for three days under normal terms, five days if they come from a remote area, or 20 days during a big influx. This would bust that down so they could hold children for years.

AMY GOODMAN: So, you tweeted Wednesday the Trump administration is now suspending virtually all asylum claims processing for the region served by Newark and Boston offices. You say there are over 40,000 cases pending in these offices.

Democracy Now!  is a national, daily, independent, award-winning news program hosted by journalists Amy Goodman and Juan Gonzalez. Pioneering the largest public media collaboration in the U.S., Democracy Now! is broadcast on (more...)
Related Topic(s): Condemnation; Families; Immigration; Merkley-Jeff; Migrant Children; Trump; Trump Hates Immigrants, Add Tags
Add to My Group(s)
Go To Commenting
The views expressed herein are the sole responsibility of the author and do not necessarily reflect those of this website or its editors.