"This is part of a broader approach of the Trump administration," the senator says. 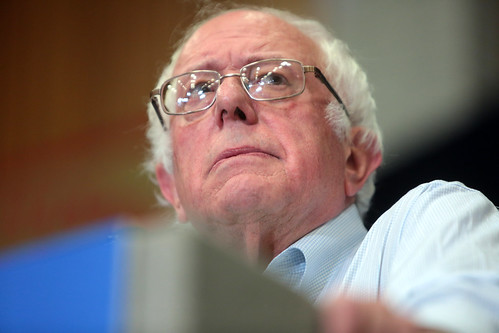 "This is part of a broader approach of the Trump administration," the senator, a member of the Veterans Affairs Committee, told CNN's "State of the Union."

Sanders' interview with host Jake Tapper comes days after Shulkin wrote in a New York Times op-ed that "advocates within the administration for privatizing V.A. health services [...] saw me as an obstacle to privatization who had to be removed."

As Common Dreams noted last week, "the VA has long been a major target of Charles and David Koch, who have used their 'front group' Concerned Veterans for America to advocate pushing veterans into the private healthcare market and sharply reducing the department's budget."

Echoing comments he made to the Washington Post last week, Sanders said, "Let us be clear...you have the Koch brothers -- the third wealthiest family in this country who are going to spend some $400,000,000 with their billionaire friends on the coming elections -- having enormous power over the Trump administration."

"We have a Secretary of Education who does not believe in public education, a Secretary of the ...EPA who does not believe in environmental protection. So what you're looking at under the leadership of the Koch brothers is a massive effort to privatize agencies of the United States government and give them over to private corporations. That is what the removal of Shulkin is all about," Sanders said.

"I would hope whether it's guns, whether it's Social Security, whether it is prescription drugs, that the Trump administration start listening to the American people, not just the billionaire class and the Koch brothers," he added.

Sanders' perspective on the president's booting of Shulkin is shared by Iraq war veteran and director of government relations for VoteVets Will Fischer, who told MSNBC Thursday that Trump and the Concerned Veterans for America's desire "to destroy and privatize the VA" was the motivating factor.

Shulkin, for his part, also spoke to Tapper on Sunday, saying that he "did not resign," adding, "I believe that way you have to improve care is to work closely with Congress, listen to the veterans' groups, and make sure that you're doing what the veterans want."

(Denise H. Rohan, the head of the nation's largest veterans organization, the American Legion, it should be noted, said in a statement last week, "Our 2 million members are opposed to any legislation or effort to close or privatize the Department of Veterans Affairs healthcare system.")

commondreams.org is a progressive publisher
Related Topic(s): Bernie Sanders; Koch Brothers; Medicaid; Medicare; Ouster; Privatization; Veterans Affairs Secretary David Shulkin, Add Tags
Add to My Group(s)
Go To Commenting
The views expressed herein are the sole responsibility of the author and do not necessarily reflect those of this website or its editors.