According to a lawsuit that Gloria Romero filed against Scholarship Prep charter schools, the former California State Senator has personal experience with gender discrimination in the workplace. During a meeting that I had with her last year, she explained how she had been forced from her position at the charter chain she helped found due to what she called "gender bias." According to her description, she had been warned against being "too bossy" with those she was managing and when she did not tone it down she was removed from her leadership role. She was firm in her stance that a male with the same management style would not have been criticized and that she had been discriminated against for being a powerful woman. 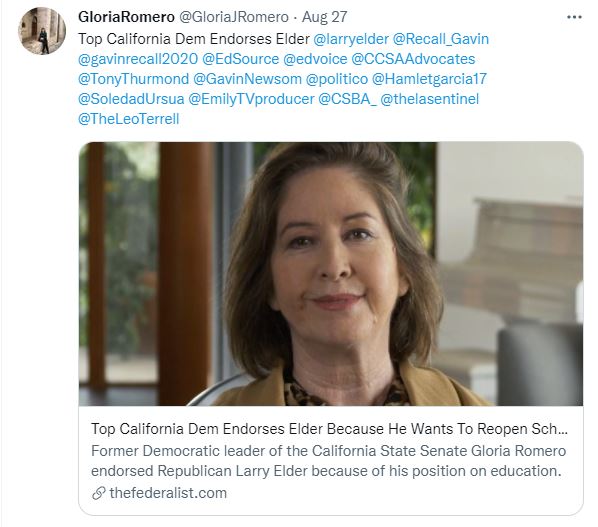 'Top California Dem'? She has been out of office for almost a decade
(Image by Gloria Romero)   Details   DMCA
Given this experience, I was surprised to read this week that Romero made national news by endorsing Larry Elder in the September 14 recall election. Her chosen candidate has denied the existence of the glass ceiling and claimed that "women exaggerate the problem of sexism." Does Romero feel that she is exaggerating her case against Scholarship Prep? Does she agree with his recent assertion that the "government should not be intruding into the relationship between employer and employee"? This would seem to indicate that he feels that Romero should not be asking the court system to order her former employer to pay her for the damages that she says that she has suffered.

On her Twitter page, Romero refers to herself as a "Feminist." This seems inconsistent with the endorsement of a man who says that "hell, yes" there are "legitimate business reasons for a venture capitalist to ask a female entrepreneur whether and when she intends to have children". In fact, he says that "regular ol' employers" should ask the same question as a way to protect their investment.

If a woman does not "intend" to get pregnant, but does accidentally find herself in that predicament, Elder's ultra-libertarian views suddenly disappear. While he believes that the government should not get involved in protecting people from discrimination, he does feel that it has a place in regulating women's bodies. He has said that states should have the right to outlaw abortion, which he believes should be classified as "murder," and has called Roe vs. Wade "one of the worst decisions that the Supreme Court ever handed down."

(Image by Unknown Owner)   Details   DMCA
Elder appears to feel that Romero, as a mother who once held a powerful position, either sacrificed her responsibilities to her child or to her office. He is quoted as criticizing a female governor with children by saying that "to tell women they can run a state, have family and children, and be equally attentive to all - is a lie." It is unclear why he believes that fathers can balance these responsibilities.

(Image by Gloria Romero)   Details   DMCA
Romero's support of a Trump-Republican like Elder should not come as a surprise to anyone. One only has to look at her Twitter feed to understand how ingrained she is in the culture of right-wing conspiracy theories. Like Nick Melvoin and Kelly Gonez on the LAUSD School Board, she calls herself a Democrat because there is no way that she could have been elected in her district as a Republican. The truth is that there is little difference between the education policies that any of these career politicians promote and those of Betsy DeVos. Out of office for almost a decade, Romero now has the benefit of not having to pretend to care about other Democratic values.

Related Topic(s): California Governors Race, Add Tags
Add to My Group(s)
Go To Commenting
The views expressed herein are the sole responsibility of the author and do not necessarily reflect those of this website or its editors.