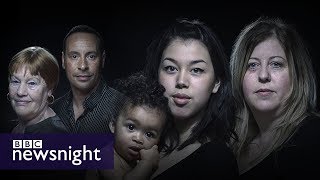 Where does the rise of identity politics leave people of mixed race?
(Image by You Tube)   Details   DMCA

White people are on the point of extinction. If you say anything about it, you are labeled a "white supremist." Black lives matter, but not white lives.

If the roles were reversed and it was whites massacring blacks, the white media in the Western world would be shrill in its condemnation of the whites. As it is blacks massacring whites, there is not a peep. The only way you can learn about it is to read English language Russian Internet sites.

Only Russia has offered South African whites refuge. The US, Europe, and Canada are overflowing with non-white immigrants but have no room for white ones.

Whites are on the road to extinction not because of massacres by blacks, but because of their own tax, social, and immigration policies. In the US and throughout Europe, high taxation has brought an end to single-earner families, such as the one that I, and my generation, grew up in. Wives have been forced out of the motherhood role into the earner mode. Consequently, the white birthrate has dropped. This process of destruction has been helped along the way by feminism and abortion on demand.

It is very difficult for a white person from one Western country to immigrate to another. An American who wishes to become, for example, a French citizen has to have a large income and a large French bank account and wait a long time. But a non-white can walk right in and take up residence without being evicted and expect to be supported by the French state. Except for Hungary, the same is true throughout the Western world.

How did something this topsy-turvey come about?

Identity Politics plays a major role. Identity Politics, now institutionalized in Western universities and school systems as black studies and women studies, teaches whites to be guilty for victimizing nonwhites and teaches nonwhites to hate whites for victimizing them. Instead of the former worker-capitalist class conflict, the conflict today is in racial and gender terms.

In Western countries where the white birthrate is collapsing and borders are open to nonwhite immigration, it is only a question of time before whites become a minority in their own country. As the nonwhite immigrants are not being assimilated, Western civilization itself is on the road to extinction.

Indeed, historical monuments are already being taken down because nonwhites find them "offensive." For example, in the American South, monuments to Confederate soldiers are being taken down. That this is happening in Southern cities that still have Southern populations shows how entrenched an ideology Identity Politics has become.

We see the same power of Identity Politics in Europe. Hungary has rejected the European Union's demand to open its borders to hordes of nonwhites from Africa and the Middle East. Against the claim that declining white European populations mean that the countries will not be able to sustain their social security systems without immigrants to support the tax base, Hungarian Prime Minister Viktor Orban offered to exempt mothers of four children from taxation. Orban's preference for Hungarians over nonwhite immigrants provoked a Swedish government minister, Annika Strandhall, to equate Orban's call for more Hungarian children to the white supremacy of 1930s Germany. It was "offensive" the Swedish minister declared and "reeked of the 1930s." Moreover, the minister declared, it was an attack on feminism which had freed women from bearing children and given them independence. The minister did not note that it was the independence to go extinct.

Throughout Europe, especially in Germany and Scandinavia, there is pressure on the police and media not to report rapes of white women and other crimes committed by nonwhite immigrants. We shouldn't be surprised if Sweden passes a law making it a "hate crime" for a white woman to report her rape by a nonwhite.

The very identity and ethnic awareness of whites are under assault. The Swedish national TV broadcaster, SVT, has produced a propaganda film under the guise of being a documentary. The film claims that Sweden was originally a country populated by blacks. In other words, the new influx is just returning Sweden to normality.

Except for Hungary, there is no European government in power that represents white citizens. Merkel, for example, represents immigrants, Europe, and Washington, but not Germans. Europeans do not even have enough of a survival consciousness to vote for nationalist parties that represent them. Marine Le Pen, who leads France's nationalist party, stands for France, and for this she is reviled. The French government wants to send her to prison for posting images from newspapers of people who were beheaded by Muslims. In other words, to present a fact that is unfavorable to a "victim group" is a hate crime.

Related Topic(s): Betrayal; Conflict; France; Immigrants; White Male Effect; White Nationalism, Add Tags
Add to My Group(s)
Go To Commenting
The views expressed herein are the sole responsibility of the author and do not necessarily reflect those of this website or its editors.