Brilliant animator, Nina Paley's Seder-Masochism (2018) is a reinterpretation of the Passover Seder and the Book of Exodus from the perspective of humankind's original deity, the Great Mother Goddess, and Her struggle against patriarchy. (Downloads are free: get the full feature here; download or just watch on vimeo here.) 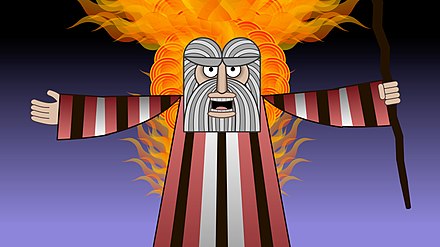 It's Bible storytelling through an anarchic feminist mix of Disney and Monty Python at its best.

Paley's book, The Seder Masochism: A Haggadah and Anti-Haggadah offers a sumptuous collection of her art.

The Seder Masochism: A Haggadah and Anti-Haggadah
(Image by Nina Paley)   Details   DMCA

Paley's first animated feature was Sita Sings the Blues, based on the stories of Sita, Rama and Lakshmi in the Ramayana.

Paley calls herself a "copyright abolitionist" and distributes her work under a "copyleft license" which offers the right to freely distribute copies and modified versions of a work with the stipulation that the same rights be preserved in derivative works created later.

Internal censorship is the enemy of creativity because it halts expression before it can even begin. - Nina Paley

Related Topic(s): Bible; Censorship; Copyright; Creativity; Exodus; Goddess; Passover; Patriarchy, Add Tags
Add to My Group(s)
Go To Commenting
The views expressed herein are the sole responsibility of the author and do not necessarily reflect those of this website or its editors.