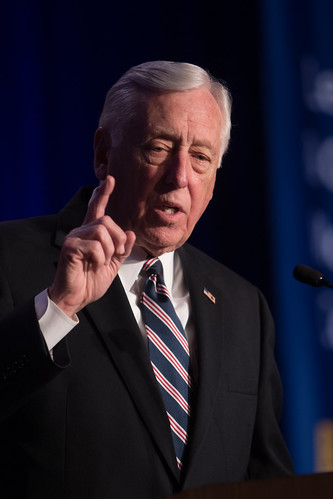 STENY HOYER, the No. 2 Democrat in the House of Representatives, has for years been a prolific campaigner on behalf of current and potential members of Congress. It was no surprise, then, that December found him in Colorado, where the party has hopes of knocking off Republican incumbent Mike Coffman.

Before Donald Trump had even been inaugurated, local resistance groups began deluging Coffman's public appearances, pressing him not to repeal the Affordable Care Act, and putting him back on his political heels. Levi Tillemann, an author, inventor, and former official with the Obama administration's Energy Department, moved back home to make a run against Coffman.

He focused his campaign on clean elections, combatting climate change, "Medicare for All," free community college, and confronting economic inequality and monopoly power. Another candidate for the nomination, Jason Crow, a corporate lawyer at the powerhouse Colorado firm Holland & Hart and an Army veteran, meanwhile, appeared to have the backing of the Democratic establishment, though it wasn't explicit. In November, it became clearer, as Crow was named by the Democratic Congressional Campaign Committee to the party's "Red to Blue" list, which the committee specifies is not an endorsement but does carry symbolic weight.

With Hoyer in Denver, Tillemann met the minority whip at the Hilton Denver Downtown to make the case that the party should stay neutral in the primary and that he had a more plausible path to victory than the same centrism that Coffman had already beaten repeatedly.

Hoyer, however, had his own message he wanted to convey: Tillemann should drop out.

In a frank and wide-ranging conversation, Hoyer laid down the law for Tillemann. The decision, Tillemann was told, had been made long ago. It wasn't personal, Hoyer insisted, and there was nothing uniquely unfair being done to Tillemann, he explained: This is how the party does it everywhere.

Tillemann had heard the argument before from D.C. insiders and local Democratic bigwigs, all of whom had discouraged him from challenging the establishment favorite. The only difference was that for this conversation, the candidate had his phone set to record.

Go to The Intercept to read this entire article.

LEE FANG  Lee Fang is a  reporting fellow with The Investigative Fund at The Nation Institute. He covers money in politics, conservative movements and lobbying. Lee's work has resulted in multiple calls for hearings in Congress and the (more...)
Related Topic(s): Audio; Democratic Party; Fundraising; Intercept; Nomination; Progressives, Add Tags
Add to My Group(s)
Go To Commenting
The views expressed herein are the sole responsibility of the author and do not necessarily reflect those of this website or its editors.