A debate rages on over whether a secret vote in the Senate led to the conviction of impeached former president Donald Trump. Enthusiasts of the idea, desperate to see some accountability come to Trump, argue that if only the Republican Senators were gifted anonymity in their vote, if only they were not required to display the courage of their convictions, then maybe, just maybe, they would do the right thing.


As much as I desperately want to see Trump held accountable, this argument is fundamentally flawed, but since so many are arguing it I wanted to break down what I see as a fatal error in their thinking.


First the very idea of secrecy, as JFK put it in his now famous 1961 speech "The very word secrecy is repugnant in a free and open society" Obviously this secrecy referred to those things which are obscured from the people that would prevent them from effectively deciding as citizens if they agree with a particular cause or not - to be a full participant in the democratic process one must have all true and accurate information available for his consideration to make a rational and ethical decision. To withhold information from a citizen is to hinder his ability to participate fully in his civic duty.


But there are times when secrecy is actually required to prevent the corruption of a process. For example the secret ballot makes the corrupt practice of "buying votes" moot. Any person is welcome to throw his money away to get promises of allegiance at the voting booth but he will never really know if he got what he paid for. Secrecy in Grand Jury proceedings are to protect the defendant in the event that there is not enough evidence to go to trial, the damage would already be done due to his name being associated with the crime. In some countries where extremely violent gangs run drug cartels, the identities of the jurors are kept secret so they will not be subject to retaliation from the defendant.


So let us look at the question of why secrecy is needed for Senators to be free to "vote their conscience". Throughout Trump's presidency he conducted himself in very egregious ways often with little vocal opposition to his behavior from fellow Republicans. This, the media explained, was due to their "fear" of retaliation from Trump. His angry tweets. His threats to primary them. And these threats bore out in some cases. When John McCain, Susan Collins, Lisa Murkowski and Susan Collins voted against him on the repeal of Obamacare, they immediately drew Trump's ire. As his presidency continued it was obvious that Trump demanded absolute loyalty - or else. And many Republicans got the message loud and clear.


By the first impeachment they were already strongly signaling their loyalty by stating they would acquit Trump before the first word of testimony. His defenders became louder and more overt, just to make sure Trump knew who his allies were. Who his servants are. Even throughout his lies about the pandemic, his dividing the country into "red" states and "blue" states they stood by him. Even through election lies and his inability to promist a peaceful exchange of power they were his obedient lapdogs. And even after the most egregious act of insurrection, only a few changed their course. 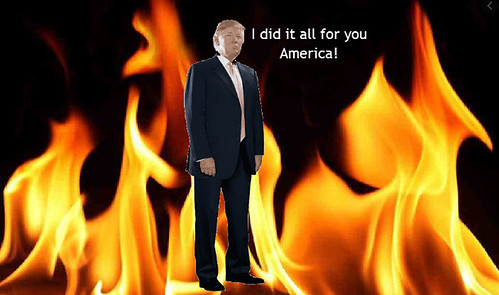 But Trump is gone. In spite of the shocking number of votes he received, he still lost the election. In spite of his massive in person rallies, in spite of the millions of dollars spent on ads, in spite of all of the fear mongering about the country falling into chaos and communism if Biden won, in spite of Fox telling its viewers on a nightly basis that the "mobs" would take over the suburbs and there would be no police to respond because they had been defunded, in spite of voter suppression, in spite of his hamstringing to post office to intentionally delay votes - he lost, and frankly, he lost badly. And in spite of his desperate attempts to litigate a victory AND a coup attempt, he still lost. So it begs the question. With all of the power he held as president, he was unable to prevent his loss. So what power could he possibly have now that he is just a normal citizen?


The ire the Republicans fear is obviously not, and perhaps never was , a fear of Trump, but of the base who elected him and who had become even more radicalized under his presidency. The GOP can not risk a vote against Trump's angry mob because they know, if they remove Marjorie Taylor Green today, the next round of elections, other radicals will primary them and they will be removed. They see the writing on the wall. The base wants extremists. Sanity is now a liability within the GOP.


So some would argue "Exactly! That's why they have to have a secret vote to impeach Trump so no one will know who voted for it and who voted against it! Look how many stood by Liz Cheney when they had the protection of secrecy but how few voted against Greene when it was public!"


The problem with that is, the entire reason the GOP is in this situation is because their own deep rooted desire to stay in power takes precedence over morality. And too many, like Josh Hawley and Matt Gaetz have already filled their nostrils with the pungent scent of political opportunism. If the base became more radical under Trump and the GOP saw how the transaction works. Give them what they want, regardless of how awful, and they will vote for you en mass. They will do your bidding. Even break the law if you need them to. They will even kill. So people like Ted Cruz and have decided to play to that radicalism.


Do these people wanting a secret vote realize that if Trump were impeached by a secret vote, those like Hawley, and Gaetz and Green would be above reproach by the base and would eagerly out those as traitors who voted to impeach. It wouldn't matter if they actually knew. Don't you see? They would tell their base they "know" who the traitors are and the base would believe them. It would be the Salem witch trials of the GOP. This would give the radicals even more power and stature. You can't solve radicalism by caving in to it.


Secrecy is not good for governance and only when a higher ideal is being protected should we allow secrecy. Allowing the GOP to vote in secrecy just to protect them from taking a vote which may alienate them from Trump's extreme base is no such lofty reason. It is pure cowardice. Either you support extremism or you don't. Either you support Greene and her minions or you don't. If you want to cast your lot with them, then so be it and you will have short political security at the cost of your entire party. If you vote against extremism, which is the right thing to do, you will lose the extremist vote, and maybe your seat, but in the long run if enough people stand up to the radicals, they will have no other choice but to vote for someone who is sane.


Mitch McConnell is in great part for this political cowardice. As leader he has specifically refused to allow votes on legislation that would be difficult votes for his colleagues. It's time for the GOP to take a stand, a public stand, on where they are at with the issues of extremism.


Secrecy in the impeachment of Trump provides for no lofty goal. It serves only to further insulate the cowards in Congress for showing moral courage and even more so, to face the monster which THEY had created for their own selfish purposes.