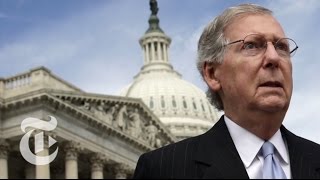 (Update: After political pressure from Mitch's campaign and some of his supporters, Twitter has since unlocked the account and restored the tweet. "It shouldn't have taken an avalanche of outrage from across the country to stop Silicon Valley from launching an effort to silence conservatives like the majority leader of the United States Senate in the first place," said Kevin Golden, Mitch's campaign manager in a statement.)

One of those protesters was identified, by the Courier Journal, as a Black Lives Matter member, Chanelle Helm, who shouted, "Just stab the mothefucker [McConnell] in the heart, please."

Twitter, which makes no attempt to curtail the phrase "massacre Mitch" on its platform, had wanted the McConnell video taken down because it "violated our violent threats policy, specifically threats involving physical safety..."

How much bullshit does Twitter think it can get away with? Apparently, a mountain of it.

The "violent threats policy" is aimed at individuals or groups that promote their attacks as a way of gaining advocates and publicizing their actions. THIS video was posted by McConnell, who was the TARGET of a violent threat. Anyone who fails to see the difference should redo their education, starting with the first grade.

Let's see. Suppose a hundred people gathered outside the headquarters of the FBI and shouted violent threats against the Bureau? And suppose the Bureau posted a tweet about it with video? Do you think Twitter would lock the FBI's account?

Suppose a few people stood outside a building where Barack Obama was giving a speech and shouted violent threats at him, and suppose a Twitter user posted video of THAT? Do you think Twitter would suspend his account?

Actually, Twitter Inc. is violating a standard that any reasonable person would advocate: DON'T DEFEND YOUR BIAS WITH HALF-COCKED LIES. DON'T CONTRIBUTE TO DESTROYING THE 1ST AMENDMENT.

Related Topic(s): McConnell-Mitch; Threats; Twitter; Video, Add Tags
Add to My Group(s)
Go To Commenting
The views expressed herein are the sole responsibility of the author and do not necessarily reflect those of this website or its editors.