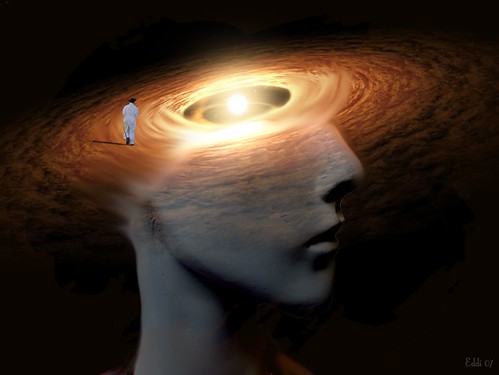 The foundational premise of my new book, Unexplained Consciousness Events: Exploring the Possibilities, is that at the deepest level of the universe lies truth that is only revealed in mythos. Like a Zen koan, it blows the rational mind and provokes great doubt that can only be comforted with faith in the unknowable.

Science tells us one story and religion another. Neither is complete. Neither offers absolutes. Together they offer profound new questions. In union, they can give us a depth of understanding that leads to a new level of comfort and assurance.

We live in a universe that will never reveal all of its secrets. We do not have the capacity to understand them, let alone even identify all the variables. We have suspected this since we became conscious and created great religious allegories to point to what we know is here and beyond our rational minds to comprehend.

Now science is beginning to explain some of those mysteries and expose us to levels of reality we couldn't have dreamed of a mere century ago. As we reveal them we stand in awe at what we find. Our scientific models cannot be reconciled. Our religious metaphors fade by comparison to what we are beginning to see.

It is beyond me or the scope of this book to make assertions about this enigmatic universe. But the scientists I quote throughout agree on one basic principle; this is a mysterious place that defies our ability to provide a comprehensively coherent explanation of its existence.

But there is good news here and it comes from reconnecting to our ancient wisdoms. In her book, The Battle for God, former nun Karen Armstrong draws an important distinction between mythos and logos. In times past, people evolved two ways of thinking, speaking, and acquiring knowledge, which she referred to as mythos and logos. They were complementary ways of finding the truth so both were needed.

Now, we've arrived at a time when the mythos, the subjective, has been devalued in favor of the logos; the objective, scientific explanation of reality.

There's a clue to our dilemma in Armstrong's words, "In the premodern world, both mythos and logos were regarded as indispensable. Each would be impoverished without the other. Yet the two were essentially distinct, and it was held to be dangerous to confuse mythical and rational discourse."

Don't accept my claims at face value. Look at the evidence that surrounds us. The destruction of the planet, the inequalities of wealth, the broken politics of special interests, the worship of money. These are all results of a scientism, the belief that science has the answer to every question because the universe is an indifferent mechanical place with no meaning. That the rational mind is all we need to think up the next great idea and solve the problem of infinite growth and consumption on a finite planet.

The mythos is all but dead in postmodern American. But the joke is on us. Try to understand what we're finding at the fundamental level of this mysterious cosmos rationally. The greatest minds on the planet go tilt. The largest machine every built by human beings, the Large Hadron Collider in Cern, points to deeper and deeper mysteries but every new finding results in more questions.

If we're going to save ourselves, we'd better be reconnecting the many places we've disconnected. We will only understand the cosmic mysteries with our whole capacity and that calls for the mythos and the logos to come together again.

Related Topic(s): Consciousness; Faith; God; Reality; Religion; Religion And Science; Religion And Spirituality; Religion Interfaith; Truth; Wisdom, Add Tags
Add to My Group(s)
Go To Commenting
The views expressed herein are the sole responsibility of the author and do not necessarily reflect those of this website or its editors.