"The CDE (California Department of Education) notes that a negative year-end fund balance could jeopardize PTLAH's (Prepa Tec High School) fiscal sustainability since the school's liabilities could not be satisfied even if all of PTLAH's assets were liquidated." - LAUSD Charter School Division

There are not many better examples of a failed charter school than Prepa Tec High School. It is so unstable that it admits to having had a 100% turnover in its administration and a loss of 50% of its teachers. Academically, only 3.26% of this school's students met state standards in math. Its audited financials show that at the end of the last school year, the school was $485,718 in debt and had no cash reserves. Despite all of these failures, the leadership of this sinking ship is so clueless that it describes the school as being the gold standard model of education.

Ignoring the school's lack of seaworthiness, LAUSD Board Member Nick Melvoin joined Monica Garcia in voting to allow it to sail for another five years. Fortunately, the five other members of the board did not ignore Prepa Tec's inability to serve its students and denied the request to renew the charter petition.

Instead of concentrating on a plan to wind down operations and assist their student body in transitioning to new schools in August, the school's leadership appealed the LAUSD's decision to the State Department of Education. Following the rare unanimous recommendation of the state Advisory Commission on Charter Schools to deny the renewal, the state board upheld the denial by the Los Angeles School Board. 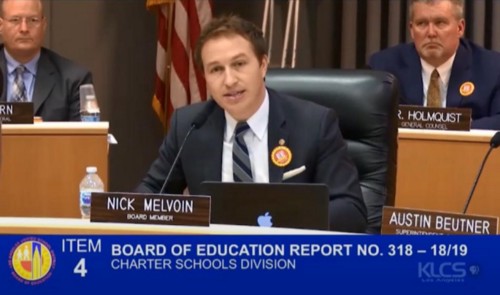 (Image by LAUSD)   Details   DMCA
With the state board's repudiation of Melvoin's vote to approve the renewal of an obviously failing charter school, this board member needs to explain himself. He claims to support using data in the decision-making process but was willing to overlook a data point that showed that a dismal 3.26% were meeting math standards at this school? He had no concerns with the financial condition of a school that had "been in 'poor fiscal condition' since the school's first year of operation"? If this was not enough to close the school, what criteria would he use to determine if a charter school was failing in its mission?

This is not the first time that Melvoin has failed in his obligation to protect the students of charter schools and the public that funds them. When he was presented with evidence that the LAUSD Charter School Division had allowed Community Preparatory Academy to defraud taxpayers, Melvoin laughed at the allegation that oversight was not thorough enough. The Executive Director of this school later pleaded guilty to embezzling $3.1 million in school funds.

In 2017, Melvoin defeated former LAUSD Board President Steve Zimmer with a campaign that pledged to put "Kids First." With his vote to keep a failing charter school open, Melvoin clearly broke this promise. Instead, he paid his debt to the charter school industry that funded his campaign.

Election Day 2022 cannot get here quickly enough.
________________________________
Carl Petersen is a parent, an advocate for students with special education needs, an elected member of the Northridge East Neighborhood Council, a member of the LAUSD's CAC, and was a Green Party candidate in LAUSD's District 2 School Board race. During the campaign, the Network for Public Education (NPE) Action endorsed him, and Dr. Diane Ravitch called him a "strong supporter of public schools." For links to his blogs, please visit www.ChangeTheLAUSD.com. Opinions are his own.