Think of Nikki Haley for President! 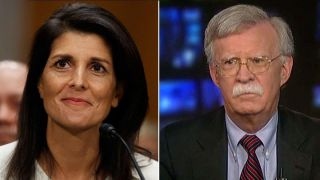 The musical chairs playing out among the senior officials that make up the President Donald Trump White House team would be amusing to watch but for the genuine damage that it is doing to the United States. The lack of any coherence in policy means that the State Department now has diplomats that do not believe in diplomacy, and environment agency heads that do not believe in protecting the environment. It also means that well-funded and disciplined lobbies and pressure groups are having a field day, befuddling ignorant administrators with their "fact sheets" and successfully promoting policies that benefit no one but themselves.

In the Trumpean world of all-the-time-stupid, there is, however, one individual who stands out for her complete inability to perceive anything beyond threats of unrelenting violence combined with adherence to policies that have already proven to be catastrophic. That person is our own Ambassador to the United Nations Nikki Haley, who surfaced in the news lately after she unilaterally and evidently prematurely announced sanctions on Russia. When the White House suggested that she might have been "confused" she responded that "With all due respect, I don't get confused."

This ignited a firestorm among the Trump haters, lauding Haley as a strong and self-confident woman for standing up to the White House male bullies while also suggesting that the hapless Administration had not bothered to inform one of its senior diplomats of a policy change. It also produced a flurry of Haley for higher office tweets based on what was described as her "brilliant riposte" to the president.

One over-the-top bit of effusion from a former Haley aide even suggested that her "deft rebuttal" emphasizes her qualities, enthusing that "What distinguishes her from the star-struck sycophants in the White House is that she understands the intersection of strong leadership and public service, where great things happen," and placing her on what is being promoted as the short list of future presidential candidates.

For sure, neocon barking dog Bill Kristol has for years been promoting Haley for president, a sign that something is up as he was previously the one who "discovered" Sarah Palin. Indeed, the similarities between the two women are readily observable. Neither is very cerebral or much given to make any attempt to understand an adversary's point of view; both are reflexively aggressive and dismissive when dealing with foreigners and domestic critics; both are passionately anti-Russian and pro-Israel. And Kristol is not alone in his advocacy. Haley regularly receives praise from Senators like South Carolina's Lindsey Graham and from the Murdoch media as well as in the opinion pages of National Review and The Weekly Standard.

The greater problem right now is that Nikki Haley is America's face to the international community, even more than the Secretary of State. She has used her bully pulpit to do just that, i.e., bully, and she is ugly America personified, having apparently decided that something called American Exceptionalism gives her license to say and do whatever she wants at the United Nations. In her mind, the United States can do what it wants globally because it has a God-given right to do so, a viewpoint that doesn't go down well with many countries that believe that they have a legal and moral right to be left alone and remain exempt from America's all too frequent military interventions.

Nikki Haley sees things differently, however. During her 15 months at the United Nations she has been instrumental in cutting funding for programs that she disapproves of and has repeatedly threatened military action against countries that disagree with U.S. policies. Most recently, in the wake of the U.S. cruise missile attack against Syria, she announced that the action was potentially only the first step. She declared that Washington was "locked and loaded," prepared to exercise more lethal military options if Syria and its Russian and Iranian supporters did not cease and desist from the use of chemical weapons. Ironically, the cruise missile attack was carried out even though the White House had no clue as to what had actually happened and it now turns out that the entire story, spread by the terrorist groups in Syria and their mouthpieces, has begun to unravel. Will Nikki Haley apologize? I would suspect that if she doesn't do confusion she doesn't do apologies either.

Haley, who had no foreign policy experience of any kind prior to assuming office, relies on a gaggle of neoconservative foreign-policy "experts" to help shape her public utterances, which are often not cleared with the State Department, where she is at least nominally employed. Her speechwriter is Jessica Gavora, who is the wife of the leading neoconservative journalist Jonah Goldberg. Unfortunately, being a neocon mouthpiece makes her particularly dangerous as she is holding a position where she can do bad things. She has been shooting from the lip since she assumed office with only minimal vetting by the Trump Administration, and, as in the recent imbroglio over her "confusion," it is never quite clear whether she is speaking for herself or for the White House.

Haley has her own foreign policy. She has declared that Russia "is not, will not be our friend" and has lately described the Russians as having their hands covered with the blood of Syrian children. From the start of her time at the U.N., Haley has made it clear that she is neoconservatism personified and she has done nothing since to change that impression. In December 2017 she warned the U.N. that she was "taking names" and threatened retaliation against any country that was so "disrespectful" as to dare to vote against Washington's disastrous recognition of Jerusalem as Israel's capital, which she also helped to bring about.

As governor of South Carolina, Haley first became identified as an unquestioning supporter of Israel through her signing of a bill punishing supporters of the nonviolent pro-Palestinian Boycott, Divestment and Sanctions (BDS) movement, the first legislation of its kind on a state level. Immediately upon taking office at the United Nations she complained that "nowhere has the U.N.'s failure been more consistent and more outrageous than in its bias against our close ally Israel" and vowed that the "days of Israel bashing are over." On a recent visit to Israel, she was feted and honored by Israeli Prime Minister Benjamin Netanyahu. She was also greeted by rounds of applause and cheering when she spoke at the annual meeting of the American Israel Public Affairs Committee (AIPAC) in March, saying "When I come to AIPAC I am with friends."

Nikki Haley's embrace of Israeli points of view is unrelenting and serves no American interest. If she were a recruited agent of influence for the Israeli Mossad she could not be more cooperative than she apparently is voluntarily. In February 2017, she blocked the appointment of former Palestinian Prime Minister Salam Fayyad to a diplomatic position at the United Nations because he is a Palestinian. In a congressional hearing she was asked about the decision: "Is it this administration's position that support for Israel and support for the appointment of a well-qualified individual of Palestinian nationality to an appointment at the U.N. are mutually exclusive?" Haley responded yes, that the administration is "supporting Israel" by blocking every Palestinian.

At various U.N. meetings, though Haley has repeatedly and uncritically complained of institutional bias towards Israel, she has never addressed the issue that Israel's treatment of the Palestinians might in part be responsible for the criticism leveled against it. Her description of Israel as a "close ally" is hyperbolic and she tends to be oblivious to actual American interests in the region when Israel is involved. She has never challenged the Israeli occupation of the West Bank as well as the recent large expansion of settlements, which are at least nominally opposed by the State Department and White House. Nor has she spoken up about the more recent shooting of three thousand unarmed Gazan demonstrators by Israeli Army sharpshooters, which is a war crime.

Haley's hardline on Syria reflects the Israeli bias, and her consistent hostility to Russia is a neoconservative position. She has repeatedly said that regime change in Damascus is a Trump administration priority, even when the White House was saying something different. A White House warning that it had "identified potential preparations for another chemical weapons attack by the Assad regime led to a Haley elaboration in a tweet that "...further attacks will be blamed on Assad but also on Russia and Iran who support him killing his own people."

Related Topic(s): AIPAC; Ambassador; Ambassador Nikki Haley; Bias; Israel; John Bolton Warmonger; Neoconservatives; President; Syria, Add Tags
Add to My Group(s)
Go To Commenting
The views expressed herein are the sole responsibility of the author and do not necessarily reflect those of this website or its editors.