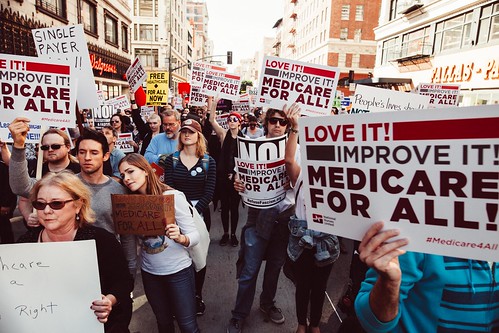 Medicare for All rally
(Image by mollyktadams)   Details   DMCA

That is about the stupidest argument for not making an urgent reform of an outrageous pirate-capitalist system I can imagine!

To get a sense of how crazy this argument is, let's look back at the history of capitalist development. When the steam engine was invented and ships started using motors instead of being drawn through canals by mule or sailed across the sea by wind-power (a labor-intensive process), did anyone worry about all the mule-drivers or sailors being put out of work by the technology shift? When the automobile was invented, did anyone worry about the collapse of the horse-breeding business, which at the time was huge, or the collapse of the passenger rail and trolly industries? When oil was discovered and refineries began cracking crude into useable oil, gasoline and kerosene, did anyone worry about the rapid collapse of the whaling industry? When electronics and the internet made operators redundant, did anyone worry about an army of unemployed switching and information-assistance operators? No, of course not! All of this "creative destruction" was viewed as progress. Losers from such shifts were expected to suck it up and find new employment.

Currently we are realizing that the coal, oil and gas industries are threatening to destroy life on earth, so nations (excepting the US) are working to shut down those industries as quickly as possible, replacing them with clean energy alternatives like solar and wind power. It would be ludicrous to say (as the Trump administration, and some conservative Democrats do), "Well, we can't save civilization and indeed the entire biosphere of the earth because energy workers will lose their jobs."

Healthcare in the US needs a revolution

Well, health care is the same. The US health care system is a top-heavy, over-priced disaster costing some $3.6 trillion a year in public and private funds, and about $12,000 a year for a family of four, if you count privately paid insurance premiums, company-paid premiums (which come out of profits, competitiveness and of course worker salary budgets), co-pays, deductibles and out-of-pocket costs. It's a system that despite costing twice what any other modern nation spends on its health care leaves 30 million or one-in-ten Americans without any insurance coverage and another 50 million with costly insurance that doesn't really cover expenses because of absurdly high deductibles that need to first be met, and because of so many needed procedures and drugs that are excluded from coverage.

We can fix that, just as all other modern nations have already done, but to do so means getting rid of private health insurance - an industry best viewed as parasitic, not functionally useful. First of all, that is simply a fact that cannot be rationally refuted. But let's also note that most insurance companies are not simply selling health insurance. They also sell life insurance, business insurance, house insurance, car insurance, etc. So these companies wouldn't simply close their doors and go bust because of Medicare for All. They'd just have to figure out new markets to enter to make money. Sure a lot of people would lose their jobs under Medicare-for-All, but most of those who would lose their jobs are the people who spend their days at the office working to deny coverage to people who are trying to get care under the plans they pay premiums for. The rest do the bookkeeping for all the paperwork involved in reimbursing doctors and hospitals for care they deliver to patients. All of those jobs are essentially parasitic. They have nothing to do with delivering health care. Getting rid of them will be a good thing.

Let's also remember that because in the US, employers are the main place Americans get their health insurance, health care for workers represents a huge cost of production for American companies. It is a primary reason that US companies find it hard to compete with other nations - including high-wage nations like Canada, Germany, France and others. Take that cost out and US companies will become much more formidable in international markets, and will no longer need to ship their production abroad.

Why do people think that so much auto production has been shifted across the border from Detroit into Ontario, Canada? I've asked, and the answer I get from the managers of US automotive subsidiaries in Canada is always the same: no health care costs for workers, who basically earn the same as their remaining fellow UAW brothers and sisters back in the US.

The propaganda against Medicare for All is not reality-based

Paul Starr, a health economist who helped develop Hillary Clinton's failed attempt at health care reform in the first year of the presidency of Bill Clinton, just was interviewed for an article in the Philadelphia Inquirer, and opined that Sanders' Medicare for All plan could "never happen," because it would so expensive it would turn the US into little more than "a health insurance company with armed forces."

It's a witty line but it is hugely deceptive. Starr assumes first of all that the cost of the program would be roughly the same as it is now, which is absurd. With the government the sole payor for hospitals, doctors, drug companies and medical equipment makers, prices would be costs for all those things would be pushed down to the much lower to what they are in other countries that have government-funded health care, meaning roughly 50% or even less of what they are in the US. Second, all the current absurdly high costs paid for Medicaid for the poor, charity care provided by private hospitals which are currently passed along into higher insurance premiums for insured patients, and also the high costs of emergency care and late treatment for diseases that should have been treated sooner (and more cheaply) but weren't because people without insurance or with inadequate insurance put it off, would be gone if everyone received high quality care through Medicare for All.

Related Topic(s): Bernie Sanders 2020; Bernie Sanders Presidential Campaign; Healthcare Propaganda; Medicare For All, Add Tags
Add to My Group(s)
Go To Commenting
The views expressed herein are the sole responsibility of the author and do not necessarily reflect those of this website or its editors.