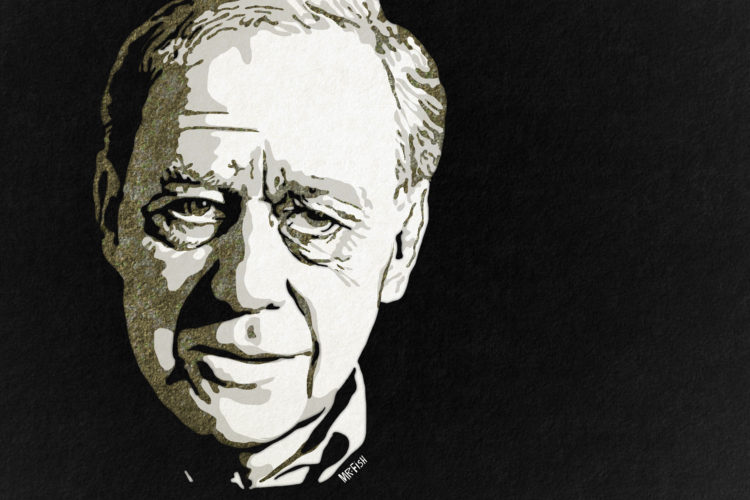 When I returned to the United States after two decades overseas covering wars and other conflicts as a reporter, I searched out Samuel Hynes at Princeton. Sam, who had been a Marine Corps pilot in World War II, had taught literature at the university and was one of the most important contemporary writers on war. He grasped that war is always about betrayal, betrayal of the young by the old, of soldiers and Marines and others by politicians and of idealists by cynics.

We ended up living on the same street and became close friends. We were orphaned by our experiences in war and by our grounding, in the electronic age, in the world of print -- two prisms through which we interpreted reality. We spoke in a shorthand filled with literary references and with a visceral understanding of the capacity for human depravity and violence. In war, Sam wrote, "we learn that elements of our nature as human beings we thought were immutable can be diminished or destroyed, and that the human heart may be colder and crueler than our experience has shown us." Even humor is different, he noted, "because it is full of death."

In his books, Sam, who died at 95 earlier this month, chronicled the culture of war and its effects on young men who went in search of adventure and glory in the military and came home maimed and disillusioned. His works included "The Soldiers' Tale: Bearing Witness to Modern War," "A War Imagined: The First World War and English Culture," "The Unsubstantial Air: American Fliers in the First World War," "On War and Writing," "The Auden Generation: Literature and Politics in England in the 1930s" and a memoir of his time as a combat pilot in the South Pacific, "Flights of Passage: Reflections of a World War II Aviator."

Sam's books soar to poetic heights. He was a gifted and lyrical writer. He studied with Robert Penn Warren at the University of Minnesota and Lionel Trilling at Columbia University, where he got his doctorate. He was friends with W.H. Auden, his favorite poet, as well as with Ezra Pound. As a boy he watched his political hero, Franklin Delano Roosevelt, pass by in a motorcade. He grew up in poverty in Minneapolis during the Great Depression and was never totally at ease among the East Coast elites. He was acutely aware of the danger of despotism arising from the decay of American society. He gave me the book "Defying Hitler" by Sebastian Haffner a few years ago, telling me it was the best window on where the United States was headed. Haffner blamed the rise of fascism on "the atmosphere, the general mood, the tug of the masses, which produced unimagined emotions in those who surrendered themselves (even seven-year-old boys), and left those who stayed aloof suffocating in a vacuum of arid emptiness and isolation."

Sam's house was filled with books, as is mine. He took great solace in knowing his library would end up in the hands of his grandson Alex Preston, a novelist and literary critic. "And your books?" he asked of me a few days before he died. "What will happen to them?"

Our experiences of war were different. Sam loved flying. He had, as his wife, Liz, said, "a good war." But he also understood, as he wrote, that a "good" war "is not a matter of morality after all; perhaps it's only a matter of space, and freedom, and the right machine." He was recalled to the Marine Corps in 1952 during the Korean War and would have gone to Korea if he had not had two small daughters. Instead he stayed in the United States and trained fighter pilots for the Marines, sometimes unnervingly turning off the lights on his plane and darting in and out of cloud cover to act as an enemy fighter that the other pilots had to locate and destroy.

I, however, was broken by war. I remain plagued by nightmares, trauma and memories. Once Sam and I were walking down our street and an F-16 fighter jet streaked overhead. I have been bombed by fighter jets. I involuntarily winced, but Sam said, "That always makes me proud."

No doubt our wartime experiences contributed to our politics. Sam was a New Deal Democrat. He believed in the promise of America. I spent years chronicling the atrocities and crimes of the American Empire in Latin America, the Middle East and Africa and had grown to despise the architects of imperialism who dominate the two ruling political parties and the capitalists, war industry executives and racists behind them. Sam was as ferociously stubborn as I am. When our conversations dealt with race, capitalism and empire, it was as if FDR had invited the Wobblies to lunch. But then, neither of us relenting, we would go back to literature -- William Shakespeare, much of which he could quote from memory, Thomas Hardy, George Eliot, whose novel "Middlemarch" he considered a masterpiece, Rebecca West, William Butler Yeats or Auden. I failed, although I tried repeatedly, to convince him that "Moby-Dick" was the greatest American novel. He never succeeded in getting me to read Anthony Trollope. He was engrossed in a book by the British novelist Penelope Lively in the days before his death. He asked his grandson Sam Preston to read Yeats' poem "Sailing to Byzantium," an evocation of loss and death, at his funeral service. The third stanza reads:

"O sages standing in God's holy fire
As in the gold mosaic of a wall,
Come from the holy fire, perne in a gyre,
And be the singing-masters of my soul.
Consume my heart away; sick with desire
And fastened to a dying animal
It knows not what it is; and gather me
Into the artifice of eternity."

He despaired of his physical decline, especially given an athletic prowess that kept him riding his bicycle and playing tennis into his late 80s. One recent afternoon, though he had to grip my arm as we slowly made our way around the block, he recited for me from memory the conclusion of Samuel Beckett's novel "The Unnamable":

As he lay dying, he grasped my hand and said, "We will always be friends." He paused. "You know what I mean."

His writing was a savage assault on the myth of war. His book "The Auden Generation" was important to him because it chronicled a time "when artists and intellectuals were anti-war." He may have been a former Marine Corps major with a Distinguished Flying Cross who carried out 78 combat missions in a torpedo bombing squadron in the Caroline Islands and Okinawa, but his literary hero, Auden, was a pacifist.

"In matters of war, cautionary literature and the evidence of experience do not change many minds or alter many romantic expectations," Sam wrote. "Every new generation will respond anew to war's great seduction -- not to the uniforms and the parades but to the chance to be where the danger is, where men are fighting. War brings to any society its electric, exhilarating atmosphere, and young men rush to join in it, however grim the stories of war they have read and accepted as truth. Every generation, it seems, must learn its own lessons from its own war, because every war is different and is fought by different ignorant young men."

Related Topic(s): Anti-war; Books; Death; Friends; Love; Truth; Wars, Add Tags
Add to My Group(s)
Go To Commenting
The views expressed herein are the sole responsibility of the author and do not necessarily reflect those of this website or its editors.