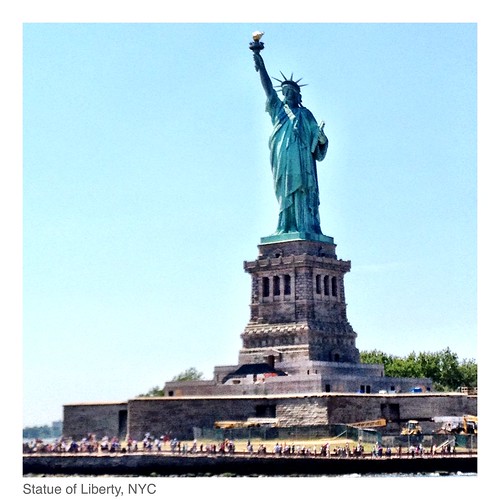 The Statue of Liberty calls us to move forard!
(Image by Sue Waters)   Details   DMCA

In the first Democratic presidential debate, Andrew Yang proposed a slogan, "Not left, not right, forward!" The next day I corrected it on Twitter to be "Forward, not left, not right!" My explanation for this change was familiar to my readers: always put the positive first. But today I'm suggesting a far more important edit: "Move (verb) America (all of us) Forward!" "Forward" is a key part of the dream Americans have of themselves as a people and a nation. We are the people who "move" everything forward, who "create a new brighter future," we are the "can do" people, we "improve, renew, or restore," we do what "works," and we used to be "optimistic." (For more of these important "American Story Elements," or ideas from our "American Metaphor Categories" list, see our site at https://metaphorproject.org/) . But Trump and the corrupt GOP have grabbed America by the scruff of the neck and dumped us back in time a long way. And they haven't actually fixed any of the serious problems getting Americans down these days. Their slogan (so far), "Keep America Great," has a pretty hollow ring in the face of all they have done to us already. No wonder most Americans are feeling down-hearted. Can a powerful appeal to our most precious American values reenergize us? And can Democrats use that to good effect?

So far the debates have demonstrated the tendency of Democrats to rely heavily on policy talk (or bickering) in promoting themselves. Of course we do want to know what they propose if elected. But when October 2020 rolls around, and more people are paying attention, it will likely be candidate charisma and the official 2020 Democratic campaign slogan that matters the most. More than ever now, people need shorthand. That's why I'm suggesting "Move America Forward!," without any negative follow up phrases beginning with "not."

Though some political analysis suggests that going negative in a campaign works, I think this election is an exception. We are already so deep in negative territory all the time now. People are already so outraged and depressed that they don't need to hear more bad news. They need hope and something to dream about again. True, they should hear exactly what candidates plan to do about everything, from jobs, fair pay, healthcare, climate safety, immigration, and all the rest. But when the real campaign is on, even those policy ideas need to be expressed as very succinct slogans. (To get even more help in generating ideas for these, please visit the full complement of Metaphor Project tools and resources found on our site. Check out our primer, the American Framing Steps, too.) It isn't too early for activists to start working on their own issue slogans. Research shows that politicians often end up adopting language that was first generated by activists well-briefed on an issue. This is especially true of activists who are open to framing their messages in a way Americans can easily get.

And don't hesitate to try to improve on my main campaign slogan suggestion, "Move America Forward!" Just be sure you test all your own creations against our Criteria for Successful Mainstream Framing. (For ideas about how to counter GOP/Trump issue framing, see my newly updated blog,
"Springing the GOP Trap.") Let's win in 2020 everywhere we can, by going positive and "speaking American" ourselves! Pass it on!
---------------------------------
Susan C. Strong, Ph.D., is the Founder and Executive Director of The Metaphor Project, http://www.metaphorproject.org, and author of our book, Move Our Message: How to Get America's Ear. The Metaphor Project has been helping progressives mainstream their messages since 1997. Follow Susan on Twitter @SusanCStrong, check out her TEDx talk, and like, follow & review The Metaphor Project on Facebook.