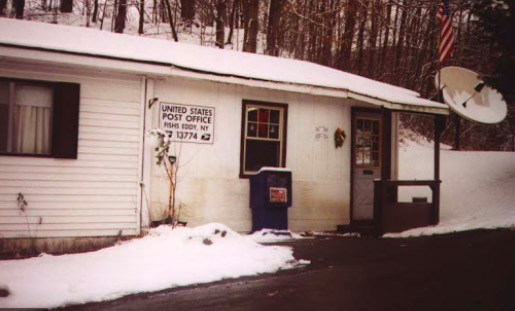 The first was in Maple Glen, PA, a small town we moved to when we left Hong Kong in 1997.

The town center, where the post office was located, is basically a triangle of shops, including a gas station, a car wash, a Supermarket and strip mall, and another small strip mall, as well as four banks.

For the first eight years we lived here, it was very convenient to have the post office. It was a place to buy a money order, or postage stamps, to send packages or larger envelopes that required weighing, particularly for sending abroad, It was also a social center. You got to know the postal workers, and they knew everyone, so it was a nice spot to pick up the local news. When it closed during the Obama administration's round of cutbacks in funding for the USPS, it was a big loss.

The next nearest postal station to us at that point was several miles away too far to go to by foot or bike, unless you had lots of time to spend in the effort which we seldom had.

The second was in a little hamlet called Fishs Eddy, up in the Catskills in what's known as the Southern Tier of New York State. Fishs Eddy, with a population of under 200 people, has a long history. Located on the old and now defunct B&O Railroad which ran along the East Branch of the Delaware, it used to cater to vacationers from New York City, but now, its hotels and B&B establishments gone, the only employer in town is a family-owned lumber mill. The population of the place is well under 200.

Back in 1984, my wife and I spent everything we had ($16,500 at the time) and bought a run-down little Methodist church in town which needed urgent care to prevent part of the food from collapsing and also to replace one wall of the stone cellar of the adjacent rectory, both of which I took care of promptly thanks to a $3000 loan from our bank.

It's hard when you're a denizen of New York City, to be accepted in a small piece of Appalachia like Fishs Eddy, where everyone is either related in some way, or knows each other since birth.

One reason we managed to fit in was our neighbors, the Rosengrants, a congenial family with several cute kids slightly older than our own daughter, who knew everyone in town who became friends right away.

The other was the local Post Office, with its delightful Postmistress, Robin Arnoldine.

Robin knew everyone, of course, because everyone in the town proper got their male from a free lockbox in the one-room office which was on the end of the trailer that Robin and her husband Gary called home. She was our source of news about goings on about town. I learned that "going to get the mail" was not just a ten-minute round-trip walk and a quick hello to Robin. It was at least a half hour of conversation, and not just with her, but with other folks who would come in for their mail while I was there.

It was at the post office where we'd learn if someone had died in town, or gone to the hospital, or why the paving of the old dirt and cinder railway right-of-way that one could drive to get to neighboring East Branch up river from Fishs Eddy, was a disaster waiting to happen (the Township of Hancock hadn't put down a good gravel bed under the macadam and had laid the tar on too thin, so it would be doomed to frost heaves and cracks with the first frosts of winter). Robin knew everything there was to know about Fishs Eddy, and everyone got their news with their mail.

But as Robin got close to retirement, and she and Gary started thinking about retiring and moving to Binghamton, 45 miles up the highway, to be never to their kids, it became clear that the post office would not last. With the Obama administration looking at ways to cut the federal subsidy to the US Postal Service, small rural part-time post offices particularly those that were rented to the USPS by the owners of homes like Robin, or to small shop owners were being shuttered.

Related Topic(s): Donald Trump; Obama; Republican; Trump And Mail-in Ballots; Trump Wants Presidency For Life; Usps; Voting, Add Tags
Add to My Group(s)
Go To Commenting
The views expressed herein are the sole responsibility of the author and do not necessarily reflect those of this website or its editors.