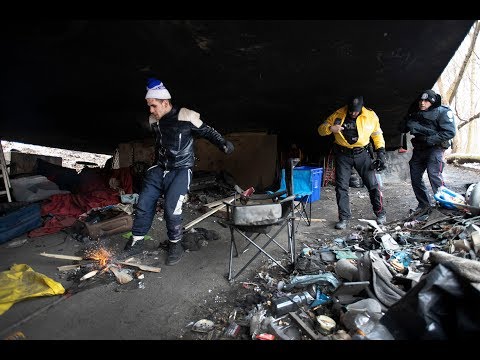 We can save the economy.

We have to throw the landlords under the bus to do it.

At this writing, 26.5 million Americans have lost their jobs to the national lock-down necessitated by the COVID-19 pandemic. Added to those who were unemployed before the coronavirus crisis, we will soon face jobless numbers equivalent to or greater than those at the height of the Great Depression. What's going to happen to them? More specifically, where will they live?

Drawing from the experience of the collapse of the USSR in 1991, the droll writer Dmitri Orlov mused on what would happen here in a similar scenario. Surviving the fall of the Soviet Union, he concluded, would be easier than it would be to make it through the then-future implosion of the United States of America.

"In the United States," Orlov wrote in 2011, "very few people own their place of residence free and clear, and even they need an income to pay real estate taxes. The real owners of real estate in the U.S. are banks and corporations. People without an income face homelessness. When the economy collapses, very few people will continue to have an income, so homelessness will become rampant. Most people in the U.S., once their savings are depleted, will in due course be forced to live in their car, in some secluded stretch of woods, in a tent or under a tarp. There is currently no mechanism by which landlords can be made not to evict deadbeat tenants, or banks prevailed upon not to foreclose on non-performing loans." Residents of apartments in the former Soviet Union faced hardships, but no one evicted them for nonpayment of rent. Private property rights were valued less than human lives.

Avoiding a mass-eviction scenario must be the top priority of American political leaders.

Aside from mass human misery, the downsides of allowing banks and municipalities and landlords to evict large numbers of people became evident after the evictions and foreclosures of millions of homes following the 2008-09 housing crisis. Every foreclosure drags down the property value of neighboring homes. Abandoned houses become meth labs.

But let's not forget about mass human misery. Even if you're rich and not a humanitarian, the thought of tens of millions of homeless people wandering streets and highways, desperate and hungry, can't possibly make you sleep soundly. Property crimes and violence designed to separate people from their possessions will soar unless we keep people in their homes, safe, fed and warm. And don't forget about the coronavirus. Even after two years from now, when there may or may not be a vaccine, many of the poor will be uninsured and won't be able to afford medical care. Kicking them out of their homes will spread the virus.

America needs a rent and mortgage holiday, not a lame moratorium that kicks the can of mass evictions down the road for a few months. That includes commercial rent. Empty storefronts become targets for burglary and squatters. Some become drug dens. Arson fires consume them and neighboring homes. Until COVID-19 is in our rear-view mirror, we need everyone and everything to stay put for health reasons. Afterward we want to give the economy a chance to recover. We don't need blight. We want restaurants and other businesses to reopen. We want individuals to return to work, not starve in the streets. Individuals and businesses who can't afford it should withhold rent from landlords and mortgage payments from banks, without penalty, until both the public health and the economic crises are over.

What about the banks and landlords? I'm not suggesting that they should be stuck with the whole tab for COVID-19. Municipalities should waive real estate taxes. They should receive relief to cover their utility and maintenance expenses. Lobbying organizations for property owners point out that their members often have underlying mortgages themselves; those mortgages too should be subject to the payment holiday. Banks should receive infusions of interest-free cash from the Fed. But the U.S. can no longer afford to let these entities continue to collect real estate profits as usual.

Landlords should take the biggest bath for the simple reason that they are social and economic parasites. Value is added via the production process; landlords add no value whatsoever. If a revolution were to turn renters into homeowners by transferring titles, and abolish bank liens and property taxes and so turn homeowners into full owners, no one would miss landlords. Former renters and mortgage borrowers could easily assume the cost of maintenance that they currently pay to landlords and banks for pennies on the dollar.

You probably know a nice landlord. My father-in-law was one. I used to sublet a room in my apartment so I could make the rent, which made me a sub-landlord. But part of the reason my rent was too high was that I could sublet that room. Landlords are unnecessary at best, pernicious at worst.

In part, eviction is a remedy: it allows a property owner to try again with a new tenant. In a broader sense, it is a threat to remaining renters: unless you pay me, I will throw you out. That threat is the ultimate expression of the enclosure of the commons. I own this. You do not. Therefore I can force you to leave.

Related Topic(s): Banks; Depression; Evictions; Homeless; Housing, Add Tags
Add to My Group(s)
Go To Commenting
The views expressed herein are the sole responsibility of the author and do not necessarily reflect those of this website or its editors.