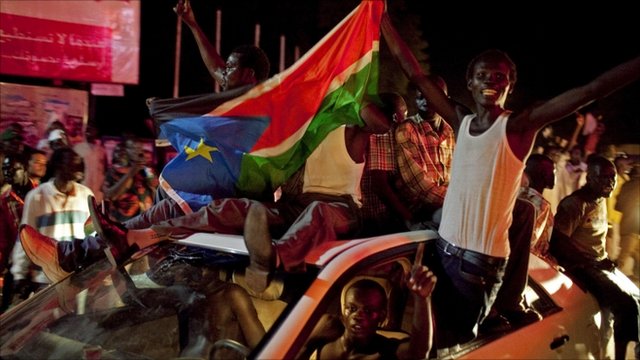 Very few areas in the world have suffered as much as the war-torn country formerly called Sudan, which really had reconfigured, through the ravishes of bloody conflict, into what became Northern and Southern Sudan, as well as Darfur in the West. War, civil war, political intrigues and human rights violations on an epic scale have been epidemic in Sudan for decades. Conflict between the largely Moslem North and more Christian and Animist South has been particularly brutal, but this ultimatley led to Southern Sudan winning the right to hold a referendum on becoming an independent nation this past January. The majority opted for succession, and Saturday, July 9th has just become the official birthday, already having arrived in our planet's newest country. They have already been partying in their new capital, Juba, and elsewhere:

Here is the latest video on the celebrations in Juba:

Here is an earlier video

and a Channel 4 News Report:


From Mercy Corps on the changes that have taken place in the past six years in the area that is now officially called South Sudan:

South Sudan - The Birth of a Nation from Mercy Corps on Vimeo.

South Sudan has become the world's newest nation, the climax of a process made possible by the 2005 peace deal that ended a long and bloody civil war.

The south's independence follows decades of conflict with the north in which some 1.5 million people died.

Celebrations in Juba began at midnight (2100 GMT). A countdown clock in the city centre reached zero and the new national anthem was played on television.

South Sudan became the 193rd country recognised by the UN and the 54th UN member state in Africa. (FOR THE FULL ARTICLE WITH VIDEO CLICK HERE)

I am a student of history, religion, exoteric and esoteric, the Humanities in general and a tempered advocate for the ultimate manifestation of peace, justice and the unity of humankind through self-realization and mutual respect, although I am not (more...)
Related Topic(s): Celebration; South Sudan; Sudan, Add Tags
Add to My Group(s)
Go To Commenting
The views expressed herein are the sole responsibility of the author and do not necessarily reflect those of this website or its editors.