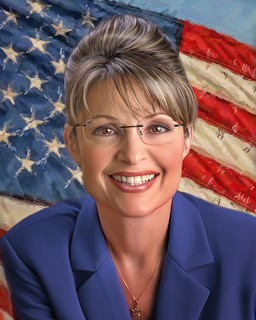 That's right, Sarah Palin, having again found the media spotlight, is casting her shadow across the more thoughtful conservatives.

This past week she declared her undying love and support of Trump's attempt to seize the presidency from the more experienced and knowledgeable candidates in the Democratic, Republican, and Green parties, and is blathering her way throughout Iowa, New Hampshire, and several early primary states to stir up Trump's far-right base.

At a media circus press conference this past week in Ames, Iowa, Palin gave the far-right wing goose bumps of excitement with her opening declaration, "Looking around at all of you, you hard working Iowa families, you farm families and teachers and teamsters and cops and cooks, you rock and rollers and holy rollers!" And then she asked the crowd, "Are you ready for the leader to make America great again?" Her question echoed that of Trump, and brought a flushed frenzy to the target audience. The question also had undertones of stating that the United States was not great, was not the world leader in numerous areas and, to the far-right's belief, not a world leader in waging war, something the Republicans have become adept at and known for.

Palin's 20-minute endorsement, filled with a "you betcha" here and a "Hallelujah!" there, rambled on, attacking President Obama, who isn't running, while avoiding anything about those who are climbing in the polls and about to catch the man who, until he declared his candidacy for president, liked being known as The Donald.

Palin's endorsement may have been because she was looking to cement an irrational possibility to be a part of a Trump administration. Several months earlier, she had declared, to the amusement of anyone who ever studied science and energy, "I think a lot about the Department of Energy, because energy is my baby, oil and gas and minerals, those things that God has dumped on this part of the earth for mankind's use, instead of relying on unfriendly foreign nations for us to import their resource." Why she wanted to run the Department of Energy was clear--she wanted to be the one to ride it into extinction.

But the Tea Party darling may have endorsed Trump not because of any ideological similarities, as both proclaimed, but because she needs media exposure. Sen. John McCain and some delusional advisors had plucked Palin out of Alaskan obscurity to be the Republicans' vice-presidential candidate in 2008. On a full-time campaign, she had become a part-time governor. After the McCain-Palin combination failed to land many blows on the Obama-Biden ticket, and was soundly defeated, Palin decided that Alaska wasn't big enough for her. She resigned the governorship half-way through her first term, wrote a best-selling book that only the extreme right-wing thought was well-written, began commanding $100,000 for speaking fees, and was courted by, and signed by, Fox News as a commentator.

However, even Fox News, which has corralled most of the conservative loons to be commentators, tired of having to deal with Palin's errors, outrageous observations, and falling ratings. Palin's and Fox's PR machines claimed the divorce was amicable.

With her popularity fading, her speaking engagements slowing down, and media coverage of her family's problems rising, Palin needed a platform to restore her reality show road show. That media glow lays in the endorsement of the narcissistic and bombastic billionaire front runner whose three marriages and four bankruptcies haven't reduced his appeal to the Republicans' family values base.

It's important that Palin get off the stage so that the conservatives who actually know what they're talking about can command some of the media attention that has been focused upon Trumpian rhetoric and not substance.

[Dr. Brasch is a professor emeritus of journalism and mass communications from the Pennsylvania State System of Higher Education, a former newspaper and magazine reporter and editor, and author of 20 books. His latest book is Fracking America: Sacrificing Health and the Environment for Short-Term Economic Benefit. The book is available at amazon.com)