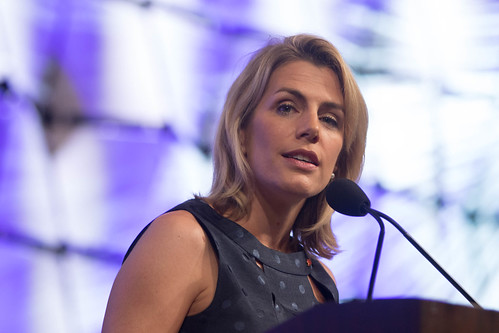 Sara Nelson AFA President
(Image by AFGE)   Details   DMCA
In June of 2022, the 12.1-million-member AFL-CIO will hold a crucial election to replace Rich Trumka, its president from 2009 until his death on Aug. 5 of this year. The AFL-CIO Executive Council has chosen Liz Shuler, the federation's number two officer, to serve as interim president until the 2022 convention. As a friend and close colleague of Trumka, Schuler has an insider's advantage in the coming election. But she will be challenged by the charismatic and militant Sara Nelson, current president of the 50,000-member Association of Flight Attendants (AFA).

Nelson wants to expand the thinning ranks of the AFL-CIO by devoting more time and resources to organizing workplaces. She wants to increase solidarity among all unions and push back hard against the 40-year-old effort by the investor class and its government allies to lock workers into wage slavery. In her speech to the 2019 Democratic Socialists of America convention, she said: "[Frederick Douglass] told us the difference between the white slave and the black slave was this: the latter belonged to one slave holder and the former belonged to the slave holders collectively. Both were plundered and by the same plunderers," the southern capitalists. Slaves were the Confederacy's most important form of capital. The low cost of slave labor helped to keep down the wages for white laborers who had to be content with being better off than slaves.

The AFL-CIO is a federation of 56 affiliated unions. Although membership numbers have been steady for several years, the percent of U.S. workers belonging to unions has continued to decline from a peak of almost 35% in 1954 to 10.8% in 2020. Union membership in the private sector has fallen to 6.2%. One effect of this decline in union density is a widening gap between productivity (the value of the output from an average hour of work) and worker compensation. In a recent report (9/2/21) the Economic Policy Institute (EPI) concluded that since 1979, productivity has grown 3.5 times as much as pay for the typical worker.

As the EPI report makes clear, most of the increase in the nation's income did not go to the workers who created it. Instead it went to higher compensation for upper management and bigger profits for shareholders and other owners of capital. From 1948 until 1980 (the beginning of the Reagan era), productivity and worker pay had grown together. After that, the rising tide of economic growth no longer lifted all boats.

In 2020, the Rand Corporation published a research paper titled "Trends in Income From 1975 to 2018." Its conclusions were similar to those of the EPI report. It projected that if growth in income for workers "below the 90th percentile" had tracked the growth in national income as it had during the three decades following WWII, the "aggregate taxable income" for this group would have been greater by $47 trillion. It would have been "$2.5 trillion (67 percent) higher in 2018."

Money is powerthe ability to command goods and services. By stripping $47 trillion from those below the 90th percentile and transferring it to the upper decile, our capitalist system has shifted power to an affluent minority at the expense of everyone else. Among the goods and services commanded by the upper decile are election outcomes and government policies. In their famous 2014 paper "Testing Theories of American Politics: Elites, Interest Groups, and Average Citizens," political scientists Martin Gilens and Benjamin I. Page conclude that we now live in a plutocratic oligarchy:

"In the United States, our findings indicate, the majority does not rule at least not in the causal sense of actually determining policy outcomes. When a majority of citizens disagrees with economic elites [the top 10%] and/or with organized interests, they generally lose. Moreover, because of the strong status quo bias built into the U.S. political system, even when fairly large majorities of Americans favor policy change, they generally do not get it."

The higher one rises within the top decile, universal health insurance, forgiveness of college debt, and childcare subsidies become less important than tax cuts and deregulation.

What these studies describe is a 40-year class war against labor waged on many fronts: increasing adoption of so-called right-to-work laws, lax enforcement and inadequacies of labor law, tax laws and trade agreements that facilitate corporations moving jobs to low-wage countries, lowering income tax rates for upper percentiles, preferential tax treatment for investment income, the shrinking value of a static minimum wage, and reduced inheritance taxes. All these are policy choices reflecting the values of a capitalist oligarchy.

Can workers become a countervailing power strong enough to take on the capitalist ruling class in our entrenched oligarchy? Given the decades-long history of declining union membership and stagnant wages in the private sector, it is clear that the current AFL-CIO leadership, structure, and tactics have failed to unite this sector's 102 million non-supervisory workers into a countervailing power. As Sara Nelson said in an address at the national convention of the Democratic Socialists of America in May of 2019:

Without the voluntary cooperation of workers, American plutocracy would collapse. That is their power, but it requires united action, class struggle and the threat of a general strike.

The winning side in today's class war regularly treats workers with a disrespect and cruelty that gets too little notice in corporate media. One example is the recent unionization drive at Amazon's warehouse in Bessemer, Alabama. According to the Corporate Accountability Lab, "Brutal working conditions, including lack of air conditioning, excessive physical demands, insufficient breaks, random security checks on break time, and invasive personnel tracking, combined with demands for a living wage triggered the organizing effort in Bessemer."

The abusive treatment that spurred the Bessemer unionization effort is typical of the company's more than 100 "fulfillment centers" in the U.S. At a giant warehouse on Staten Island, one worker explained why he quit: "I was a picker and we were expected to always pick 400 units within the hour in seven seconds of each item we picked. I couldn't handle it. I'm a human being, not a robot." Another worker said, "You're being tracked by a computer the entire time you're there. You don't get reported or written up by managers. You get written up by an algorithm."

Amazon defeated the Bessemer unionization drive with the same intimidation tactics it has used to defeat every organizing drive at its centers. As Grace Pezzella and Sejal Singh explain, "The National Labor Relations Act, the federal law governing unions and workplace organizing, is supposed to protect workers' right to organize for better wages and working conditions. But the NLRA hasn't been updated in decades, while right-wing judges and politicians have steadily chipped away at the law's protections. Today, many of Amazon's worst union-busting tactics are effective, intimidating, and mostly legal" (Slate, 4/13/21).

Even when workers are unionized, they have to engage in pitched battles with corporations just to keep the wages and benefits they have negotiated in past years. For instance, beginning on Aug. 10, the workers at every Nabisco production and distribution facility in the country went on strike. They belong to the Bakery, Confectionery, Tobacco, and Grain Millers (BCTGM) union. Nabisco makes snack foods, such as Chips Ahoy!, Fig Newtons, Oreo cookies, Ritz Crackers, Teddy Grahams, Triscuit crackers and Wheat Thins. During the pandemic, Nabisco's parent company, Monde lēz International, reported more than $5.5 billion in profits in the second quarter of 2021. These profits were due to a surge in snack purchasing during the pandemic.

Related Topic(s): Afl-cio; Afl-cio; Labor Laws US; Labor Rights; Labor-Unions, Add Tags
Add to My Group(s)
Go To Commenting
The views expressed herein are the sole responsibility of the author and do not necessarily reflect those of this website or its editors.