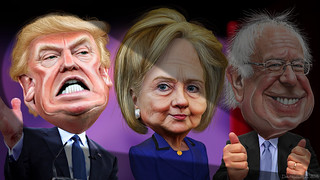 With 97% of the vote counted by the Associated Press, Bernie Sanders gets 51.4% to Hillary Clinton's 30.0%, with an odd and unexplained 12.7% going to "other" candidates in the West Virginia Democratic primary. This is what's called a landslide in politics, a YUGE victory. Unfortunately for Sanders, this small state does not change the delegate count much, adding 16 in his column to 11 in Clinton's. It's important to note, however, that the extra 3% might be enough to change the final tally by a delegate or two if Clinton loses one too.

Kentucky is next on May 17th along with Oregon, and Sanders is expected to do well in coal-country Kentucky too, despite being as anti-coal as Clinton. But it was Clinton who recently said a lot of coal miners will lose their jobs, and that is thought to have cost her a lot of votes in West Virginia and may cost her in Kentucky as well, despite a recent decision to restart her advertising campaign there and in the remaining states.

There are 11 contests on the Democratic side to go, not 9 as is sometimes erroneously reported, including the largest state of all by far, California, which has more than half the remaining delegates (1065) on its own (546). Sanders has won 10 of the last 16 contests and has a good chance in most of the remaining contests, except for New Jersey (142 delegates), which he admitted in a recent interview with Rachel Madow "would be tough" and the last contest on June 14th District of Columbia (45) which favors inside-the-beltway candidates. The contest will be decided on June 7th, however, if not before, when 6 states vote.

The Democratic Party ought to be looking beyond the primaries, however, as this recent series of polls in 3 critical swing states shows:

While all are close to the margin of error, Sanders is clearly on the winning side more often than Clinton, and by slightly larger margins.

Both candidates are beating Trump right now, but Sanders is beating him by a larger margin, and Clinton's unfavorables keep climbing while Sanders seems to be gaining in popularity, judging by both polls and recent contests.

It's not over, nor should it be.

*** UPDATE ***
Last night, Sanders led 16 to 11 in delegates with just 97% of the vote in. I wrote in my article that that might change if the last three percent was counted.
Well, it just did.
With 100% of the West Virginia vote counted, the NY Times, which takes its data from the Associate Press, is reporting that Sanders now has 18 delegates to Clinton's 11. This is a net gain of 2 delegates in a small state with just 241,016 votes and 29 delegates overall. The 12% "other" category was awarded no delegates.
Several previous races have not been adjusted to 100% counted totals, including:
New York (99%)
Nevada - which has some calculations showing Sanders might have actually won the state instead of losing it 20 delegates to Sanders 15.
Colorado (99%)
Massachusetts (99%) a squeaker for Clinton that does not include Richmond's 1 district at all.
Nebraska (99%)
Maine (91%!) There have been reports that Sanders has picked up additional delegates in Maine recently. These are not reflected in the NY Times or other major media outlets.

There are other contests not fully accounted for, not enough to tip the balance, but enough to make it closer and probably favorable to the Sanders campaign overall.

Related Topic(s): Democratic; Donald Trump; Hillary Clinton; Hillary Clinton; Sanders-Bernard, Add Tags
Add to My Group(s)
Go To Commenting
The views expressed herein are the sole responsibility of the author and do not necessarily reflect those of this website or its editors.