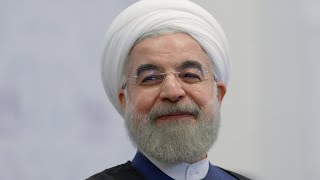 Iran's President Hassan Rouhani said unless the U.S. lifts economic sanctions against Tehran, any meeting between the two leaders would just be a photo op.
(Image by YouTube, Channel: Newsy)   Details   DMCA

The issue of the United States waging what seems to be a global war by way of sanctions rarely surfaces in the western media. The argument being made by the White House is that sanctions are capable of putting maximum pressure on a rogue regime without the necessity of having to go to war and actually kill people, but the reality is that while economic warfare may seem to be more benign than bombing and shooting, the reality is that thousands of people die anyway, whether through starvation or inability to obtain medicines. It is often noted that 500,000 Iraqi children died in the 1990s due to sanctions imposed by the Bill Clinton White House and current estimates of deaths in Syria, Iran and Venezuela number in the tens of thousands.

And meanwhile the regimes that are under siege through sanctions do not, in fact, capitulate to American demands even when they are feeling considerable pain. Cuba has been sanctioned by Washington since 1960 and nothing has been accomplished, apart from providing an excuse for the regime to tighten its control over the people. Indeed, one might argue that free trade and travel would have likely succeeded in democratizing Cuba much more quickly than threats coupled with a policy of economic and political isolation.

Apart from their ineffectiveness, the dark side of sanctions is what they do to third parties who get caught up in the conflict. America's recently imposed total ban on Iranian petroleum exports comes with secondary sanctions that can be initiated on any country that buys the oil, alienating Washington's few remaining friends and creating universal concern regarding the United States' long-term intentions. Indeed, the United States was a country that prior to the "Global war on terror" was generally liked and respected, but today it is widely regarded as the most dangerous threat to peace in the world. This shift in perception is due to the actual wars that the US has started as well as the sanctions regime which has as its objective regime change of governments that it disapproves of.

Another aspect to sanctions that is somewhat invisible is the impact that government action has had on what are regarded as the constitutional rights of American citizens. Max Blumenthal has written an interesting article on a recent application of sanctions that has affected a group of citizens who were seeking to attend a conference in Beirut Lebanon.

Blumenthal describes how the attempt to criminalize any participation in a conference sponsored by the Iranian NGO New Horizon as a "significant escalation in the Trump administration's strategy of 'maximum pressure' to bring about regime change in Iran." A number of Americans who had intended to speak or otherwise participate in the conference were approached in advance by FBI agents, evidently acting under orders from Sigal Mandelker, Treasury Under Secretary for Terrorism and Financial Intelligence. The Agents warned that any participants in the conference might be subject to arrest upon return to the US because New Horizon is under sanctions. One of those who was approached by the Bureau explained that "They're interpreting the regulations to say that even if you associate with someone who has been sanctioned, you are subject to fines and imprisonment. I haven't seen anything in the regulations that allows that, but they've set the bar so low that anyone can be designated."

The New Horizon Conference is an annual event organized by Iranian TV host and filmmaker Nader Talebzadeh and his wife, Zeina Mehanna. New Horizon was placed under financial sanctions earlier this year by the Treasury Department's Office of Foreign Assets Control (OFAC). [Full disclosure: the author attended and spoke at the conference in Mashhad last year]

US government interest in New Horizon conferences appeared to begin in 2014, after the Jewish Anti-Defamation league (ADL) called that year's meeting an "anti-Semitic gathering" that "included US and international anti-Semites, Holocaust deniers and anti-war activists."

Potential participants in the Beirut conference made strenuous efforts to find out just what the consequences might be if they were to attend the event, but the Treasury Department refused to be drawn into a debate over restrictions that were arguably unconstitutional. Lawyers who were consulted warned that any notice from the FBI that someone might be arrested should be interpreted as meaning that someone will be arrested. Other sources in the government suggested privately that the Trump Administration would be delighted if it could make an example of some Americans who were soft on Iran.

Now that the conference has been concluded without any significant American presence, there has been some clarification of how the sanctions might be applied. Responding to a query by a potential participant, an OFAC employee explained that "transaction" and "dealing in transactions," as those terms are used by OFAC, are broadly construed to include not only monetary dealings or exchanges, but also "providing any sort of service" and "non-monetary service," including giving a presentation at a conference. Any person engaging in that activity could be subject to legal consequences because the Treasury Department and OFAC have broad latitude to take action against persons who violate its rules or guidelines, and that a range of factors are taken into consideration when deciding to take action against any specific person or for any specific violation.

When asked whether dealing with non-sanctioned Iranian organizations might also be construed negatively, the OFAC employee observed that there could or might be consequences. That's because Iran (along with North Korea and a few other countries) is a "comprehensively sanctioned" country, meaning that anything having to do with "supporting it" is sanctionable.

Exactly how speaking at any Iranian sponsored event is damaging to American interests remains unclear, in spite of the "clarification" provided by OFAC, but the real damage is to those US citizens who choose to travel to countries that are at odds with Washington to offer a different perspective on what Americans actually think. And there is also considerable value in those travelers returning to the United States to share with fellow citizens perceptions of how foreigners regard US foreign policy, insofar as anything describable as a policy actually exists.

In truth, the sanctions regime with its steady diet of punishment has now entered a new phase, as Blumenthal observed, where White House aggression overseas is now blowing back, eroding the protections afforded by the Bill of Rights in an act of self-destruction that is both unnecessary and incomprehensible.

Related Topic(s): Free Speech Censored; Freedom House; Iranian; Sanctions; Trump, Add Tags
Add to My Group(s)
Go To Commenting
The views expressed herein are the sole responsibility of the author and do not necessarily reflect those of this website or its editors.