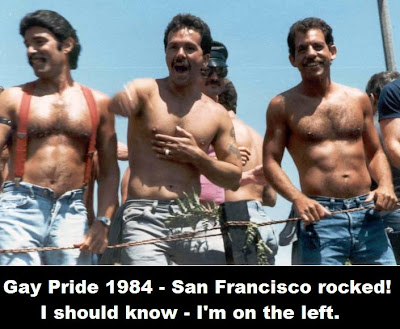 "If God doesn't destroy San Francisco, he should apologize to Sodom and Gomorrah"
"OK, so it won't burn down in the traditional sense, but where is that earthquake when you need it???"

"It's an odd thing, but anyone who disappears is said to be seen in San Francisco. It must be a delightful city and possess all the attractions of the next world"

The first two quotes were from religion-based blogs. The third was from that classic reprobate,  Oscar Wilde.

"Your city is remarkable not only for its beauty. It is also, of all the cities in the United States, the one whose name, the world over, conjures up the most visions and more than any other, incites one to dream. " - Georges Pompidou

Understatement has its purpose I suppose, but when it comes to certain topics, understatement always eludes me. So when I saw the musical Tales Of The City at San Francisco's American Conservatory Theater, I knew that understatement would be impossible: after all, I actually LIVED through all of it. I even topped Michael Mouse in some respects.[1]

It's not a great musical by Broadway standards, but what makes it superlative to San Franciscans is that it is as true as it is heartfelt: it tears down barriers and replaces them with freedom, love and understanding. It's San Francisco at its best.

Of course, it will be reviled, boycotted, demonized, and deemed absolutely criminal by all the Bryan Fischers, James Dobsons, Beverly LaHayes, Lou Engles, Herman Cains and Tony Perkinses of the country. And since the musical's premier is in San Francisco during Gay Pride month and before San Francisco's million-in-attendance Gay Pride celebration, those people will be working feverishly to revile, boycott, demonize and deem absolutely criminal the city of San Francisco itself.

Thankfully, every year the City has managed to rise above all the vitriol and deliver an astoundingly loud "FU!" to those who don't admire it for what it is: the country's most accepting and compassionate city. It rises above the vilification, above the overt attempts to "save" it. It rises above the hysterical preachers (Lou Engle has called gays in the Castro "Those people who embrace the darkness"). This year, however, might prove more difficult to be celebratory than in the past: the Christian Right is ramping up the vitriol with impunity. It realizes that an attack on San Francisco is a powerful punch against the current Obama administration, the MSM, Hollywood, and every single liberal on the planet. It will try desperately to counteract the reactions to the Gallup poll that discovered over 50% of Americans are in favor of same-sex marriage. It will revel in photos of the Pride parade showing "perverts" and it will fervently hope that last year's violence at the Pink Party will be repeated - in fact, escalate into chaos and even more bloodshed. [2]

Yes, that last statement was meant to alarm: the Christian Right is becoming more violent in its hate speech, comparing gays and lesbians to N*zis, linking them to pedophilia, incest and bestiality. Granted, they use archaic stereotypes and dismissed "research," but they are mobilizing the fringe as never before with videos, ads in newspapers, politicians and a string of radio hosts who use those same politicians brazenly to promote a neo-Reconstructionist agenda. And the fringe is reacting: hate crimes against the LGBT community are up. Violence is just around the corner: it just needs a verbal spark to set off one individual, one group.

"San Francisco has been wicked from the very beginning" 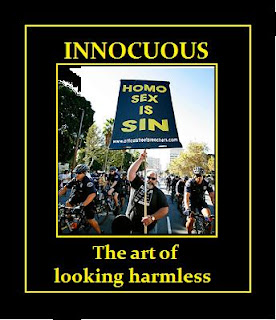 I stumbled upon an ironic video while googling "San Francisco Sodom and Gomorrah". It supposedly focuses on the firebombing of a church when anti-gay preacher Lou Sheldon was supposed to speak. Edited by an evangelical Christian, it sets out to tell people how absolutely horrible and sinful San Francisco and its gay community are. In the process, however, if you count the lies and distortions you come up with, you realize that the primary purpose was to make people totally fearful of homosexuals. [3] It reeks of  "This could happen to you!" In addition, it features Scott "Pink Swastika" Lively, one of the architects of the "kill the gays  bill" in Uganda. In their momentum focusing on gay political power, they forget the oppression gays had seen well into the 80s.

The second stage of the violence was a police raid/riot hours later in the predominantly gay Castro neighborhood, which vandalized the Elephant Walk bar and injured many of its occupants. [34] After order was restored at City Hall, SFPD cars carrying dozens of officers headed into the Castro District. [35] Officers entered a gay bar called the Elephant Walk, despite their orders not to do so. They shouted "dirty cocksuckers" and "sick f*ggots", shattered the large plate glass windows of the bar, and attacked patrons. After fifteen minutes police withdrew from the bar and joined other officers who were indiscriminately attacking gays on the street. The incident lasted nearly two hours.[4]

I was there, at both City Hall, then later in the Castro. You haven't lived until you've seen 50 riot-helmeted cops marching toward you, shields touching each other to form a wall of plexi-glass armor ready to throw tear gas. It was sooo much fun!

"But the Christian Right didn't cause the riot!" Perhaps because, at the time, the big CR was not as powerful as it is today. Its rhetoric not only kills indiscriminately, it owns politicians: just look at some of the proposed draconian laws in Texas.

Rev. Dan Vojir is has been writing/blogging on religion and politics for the better part of ten years. A former radio talk show host (Strictly Books " Talk America Radio Network) and book publisher, Dan has connected with some of the most (more...)
Related Topic(s): Bryan Fischer; Christian-taliban; Compassion; Family Research Council; Gay Pride Parade; Hate-Racism-Bigotry; Intolerance; Kill A Queer For Christ; Kill-the-gays Bill; Right Wing Mindset Culture; (more...) Righteous Arrogance; Tales Of The City; Tony Perkins, Add Tags  (less...)
Add to My Group(s)
Go To Commenting
The views expressed herein are the sole responsibility of the author and do not necessarily reflect those of this website or its editors.