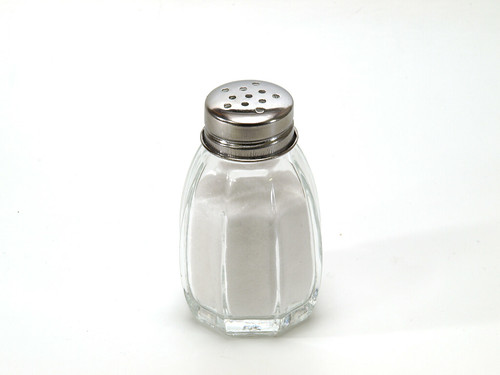 With a barrage of warnings about health threats everywhere, one less thing to worry about is welcome news. After decades of doctors' advice, low-sodium foods, health labels and warnings, it has come out that it was all a mistake. Salty foods never did cause heart attacks.

This isn't the first time the health researchers have done an about-face. Years ago, extra dietary iron was recommended by everyone from Jack Barry (remember Geritol?) to Popeye. Saturated fats were supposed to be the cause of clogged arteries, and margarine was healthier than butter. Hormone replacement therapy was supposed to lower your risk of heart disease. All these claims were reversed after brave scientists persisted in questioning the conventional wisdom until the evidence was re-evaluated.

The missing link in the logic is plaques in the artery walls. People who have plaques in their arteries have high blood pressure because the arteries are narrowed, and the heart must pump harder to get the blood through. Inflamed plaques can crumble, and with really bad luck, the broken piece can lodge in a major artery, causing a heart attack or stroke. So it is the plaques that cause high blood pressure, and plaques that cause heart attacks.

But what if your high blood pressure is caused not by plaques but by a diet of pickles and salted nuts? Your blood pressure goes up because of osmotic pressure, otherwise known as swelling. But--as it turns out--your risk of heart attack goes down. Down just a bit, but certainly not up.

The Center for Disease Control is the Federal agency that keeps such statistics. Several years back, they commissioned a review of the data and issued a report that the average amount of salt consumed by Americans posed no risk. The dam was breached, and soon more studies started pouring over the top. People on low-salt regimens actually had higher rates of heart disease than people in the same condition, same age who didn't restrict their salt. In 2014, a major review study was published by scientists from Copenhagen and the Einstein Medical Center in New York. It was a "meta-analysis" that put together data from 25 different published studies over the last 40 years. The conclusion was that, compared to the American average, people who ate less salt were more likely to have heart attacks, but people who ate more salt were not at increased risk. Only at unusually high levels of salt intake did it start to show up as a risk factor.

So salt your food to taste. If you're feeling a need for salty food, you can trust your body's message. No need to hold back on the saurkraut or pickles, kim chee or soy sauce or miso soup. If you need something to worry about, worry about sugar.

But it's not good for your car!

Every time, the Streets Dept dumps salt on streets throughout the city. It's cheap. It's quicker than a plow. It prevents accidents. It speeds traffic flow.

But there are downsides to salting as well. Salt rusts your car out. Salt gets into the gears and bearings of my bicycle and makes my dog whine and lick her paws. Salt runs off into the park and into the rivers, poisoning trees and shrubs, making the Schuylkyl brackish. Salt contributes to potholes and degraded pavement that breaks truck axles and damages suspensions, and keep the Streets Dept busy all spring putting the roads back in order, while holding up traffic with their trucks and shovels.

Salting the roads is a 75-year-old practice, but it comes from short-term thinking. In the long run, salting is not at all cheap. The cost of the salt is in the neighborhood of $40 per ton, but the cost of the damage to cars and roads is over $500 per ton. This doesn't include the lost trees, fish and wildlife, which are the hardest costs to quantify. (The rough numbers come from government-commissioned studies out of New Hampshire, Utah and Michigan.)

When all costs are taken into account, it would be cheaper for the City to hire an army of teenagers with shovels than to spread salt on the roads. Alternatively, a lot more plows and snowblowers could keep the city's streets clear without the need for salt.

Changed practices require time, planning and one-time outlays for new equipment. There is a lot of inertia to overcome. But one thing we can do right now is to cut way back on the amount of salt that's used. As I write this, we had a total of 3 inches of snow in my neighborhood, it's almost gone after 4 days, but many streets are white with salt residue, and every few blocks there are big piles, hundreds of pounds each, where salt fell off the truck. Let's stop wasting salt pollution.

Related Topic(s): Health, Add Tags
Add to My Group(s)
Go To Commenting
The views expressed herein are the sole responsibility of the author and do not necessarily reflect those of this website or its editors.