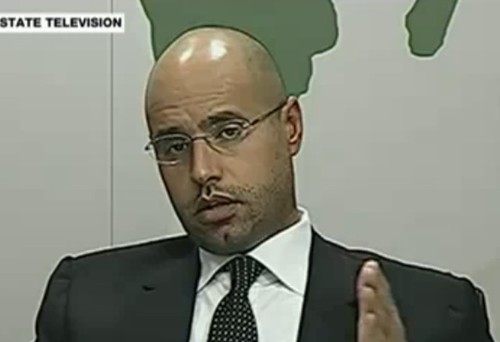 An address from Muammar al-Gaddafi's son, Saif al-Islam al-Gaddafi, was aired on television in Libya early on February 21. Saif al-Islam told Libyans he had come without a prepared speech and was going to speak from his heart and mind.

The address (which can be read here) was given as Tripoli was turning into more of a battlefield. Snipers were firing in Saha Al Khadra. His father's "thugs" were allegedly going into hospitals and killing Libyans who had been out in the streets and been wounded.

Rumors are circulating that Saif al-Islam was shot. Some of the unconfirmed reports say Saif al-Islam is dead and his father and some from the Gaddafi family has fled. Muammar has gone to Venezuela, some reports allege.

The death of Saif al-Islam is possible, but until there are reports which go beyond unconfirmed, this is largely a distracting story. What Saif al-Islam said in the recorded address that aired on February 20 is much more important.

In his rambling address, Saif al-Islam manages to outline what he thinks are key aspects of what is happening in Libya. First, there are political activists whom Libya should work with, who likely have valid grievances and demands worth considering. Two, in Bayda, where he is from and where his mother lives, "Islamic elements" have stolen weapons, killed soldiers, and would like to establish "an Islamic Emirate in Bayda." And, third, "children" out protesting managed to take drugs and then were "used." (The last part is interesting given the fact that since Libyans' "Day of Rage" on February 17 there have been little reports, if any, on Libyans finding people are getting doped up and causing problems.)

If one looks through the entire address and then sifts through the many cables from Libya that have been released by WikiLeaks and leaked to newspapers by WikiLeaks, it is possible to pull out threads to illuminate what might happen from this point forward.

Saif al-Islam emphasizes oil in Libyan society at one point saying, "American Oil Companies played a big part in unifying Libya." He indicates his fear of an Islamic Emirate being established in Bayda saying, "The British FM called me. Be ready for a new colonial period from American and Britain. ou think they will accept an Islamic Emirate here, 30 minutes from Crete? The West will come and occupy you. Europe & the West will not agree to chaos in Libya, to export chaos and drugs so they will occupy us."

In a call for Libyans to lay down arms and not become enmeshed in conflict, he says, "Before we let weapons come between us, from tomorrow, in 48 hours, we will call or a new conference for new laws. We will call for new media laws, civil rights, lift the stupid punishments, we will have a constitution." He says even his father, "Leader Gaddafi," wants a constitution.

Saif has been one of the few leaders in Libya to push for Libya to develop a constitution. He is often regarded as a leader who owes his popularity to backers who are "reformists." In a cable from November 19, 2009, on who which Qadhafi son will succeed Muammar, Mutassim is seen as a brother who stands with "conservatives" in Libya. The cable mentions in March 2009 he drafted a constitution but it was dropped from the General People's Congress agenda.

In August 2008, Saif spoke at a youth forum, where he said he would be withdrawing from politics entirely to work with civil society organizations in Libya. He pushed for reforms and spoke explicitly about passing a constitution because, to him, the Jamahiriya system had failed. 08TRIPOLI679 details":

Turning to governance, Saif al-Islam resurrected his call for a constitution, something he explicitly advocated in his 2006 Youth Forum speech in Sirte, which drew harsh criticism at the time from the Revolutionary Committees and other conservative regime elements. Reacting to that, Saif al-Islam had softened his language in his 2007 speech in Benghazi (ref B), using the term "social contract". In Sabha this year, he adopted slightly more forward leaning language, saying Libya "needs something, which is perhaps called a constitution - let's say a popular pact similar to the social pact or a pact of the mass of the people". Such a contract should stem from the popular authority of the people, he said, but stressed that a formal document of some kind was needed to enshrine and protect the will of the people against unconstitutional attempts to usurp power as in the recent coup in Mauritania.

Criticizing the inchoate nature of the decentralized Jamahiriya system, he said Libyans are frustrated with the the existing system's failure to deliver basic services such as trash collection, pest control, water and electricity, and now want a clearly articulated system of rules that govern personal conduct, economic affairs and governance. Describing the bedrock of good governance as effective local government, he stressed that despite the rhetoric about popular local committees, the Jamahiriya system of his father had not delivered on that front. Describing the decision to dismantle formal decisionmaking structures and to effectively decouple the local and central governments as "a mistake", he called for a "new administrative structure" that would better integrate local municipalities and districts with the central government.

Referring to Muammar al-Qadhafi's March 2 address to the General People's Congress, in which he called for government restructuring and radical privatization (ref C), Saif al-Islam conceded that he had been personally involved in the work of the committees tasked with implementing his father's vision. He emphasized that plans for restructuring the government are underway, and will involve reshaped local institutions and greater privatization. Arguing for aggressive privatization, he said "the state will not own anything" and "everything should be done by the private sector". (Note: As reported ref C, five committees were established to formulate plans for implementing Muammar al-Qadhafi's March 2 vision. Contacts have told us Saif al-Islam established shadow committees staffed by personnel from the Economic Development Board (EDB) and National Planning Council (NPC); the final recommendations for implementing al-Qadhafi's vision reflected heavy input from the shadow committees. End note.) Referring obliquely to reports of fierce infighting over recommendations about restructuring and privatization, Saif al-Islam noted that "many things that were not nice" had happened in the course of recent intra-government debates, but stressed that those issues had been resolved.

Muammar initiated a process for adopting a constitution quietly in mid-November of 2008. 08TRIPOLI936 shows Muammar allegedly kept it quiet so his son, Saif, could be involved in the process.

Kevin Gosztola is managing editor of Shadowproof Press. He also produces and co-hosts the weekly podcast, "Unauthorized Disclosure." He was an editor for OpEdNews.com
Related Topic(s): Cablegate; Corporations Oil; Libya; Libya Revolution; Libyan Arab Jamahiriya; Muamar Al Gaddafi; Wikileaks, Add Tags
Add to My Group(s)
Go To Commenting
The views expressed herein are the sole responsibility of the author and do not necessarily reflect those of this website or its editors.