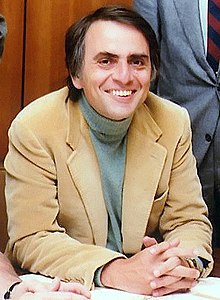 Carl Sagan Planetary Society.JPG
(Image by (From Wikimedia) NASA/JPL, Author: NASA/JPL)   Details   Source   DMCA
For years, I was personal friends with Carl Sagan's sister, Cari Greene, who lived in my town of Charleston, West Virginia. The astronomer dedicated one of his final books to her. I almost felt like part of the great researcher-television host's extended family.

Sagan, the world's best-known scientist in the late 20th century, wrote a blunt attack on all forms of magical thinking. In The Demon-Haunted World: Science as a Candle in the Dark, he assailed:

The message of his book may be summed up: Many people believe almost anything they're told, with no evidence, which makes them vulnerable to charlatans, crackpots and superstition. Only the scientific outlook, mixing skepticism and wonder, can give people a trustworthy grasp of reality.

Sagan scorned supernatural aspects of religion. Some of his comments:

"If some good evidence for life after death were announced, I'd be eager to examine it; but it would have to be real scientific data, not mere anecdote. Better the hard truth, I say, than the comforting fantasy."

"If you want to save your child from polio, you can pray or you can inoculate. Try science."

"Think of how many religions attempt to validate themselves with prophecy. Think of how many people rely on these prophecies, however vague, however unfulfilled, to support or prop up their beliefs. Yet has there ever been a religion with the prophetic accuracy and reliability of science? No other human institution comes close."

"Since World War II, Japan has spawned enormous numbers of new religions featuring the supernatural. In Thailand, diseases are treated with pills manufactured from pulverized sacred Scripture. 'Witches' are today being burned in South Africa. The worldwide TM [Transcendental Meditation] organization has an estimated valuation of $3 billion. For a fee, they promise through meditation to be able to walk you through walls, to make you invisible, to enable you to fly."

"The so-called Shroud of Turin is now suggested by carbon-14 dating to be not the death shroud of Jesus, but a pious hoax from the 14th century - a time when the manufacture of fraudulent religious relics was a thriving and profitable home handicraft industry."

Sagan quoted the Roman philosopher Lucretius: "Nature is seen to do all things spontaneously of herself, without the meddling of the gods."

And he quoted the Roman historian Polybius as saying the masses can be unruly, so "they must be filled with fears to keep them in order. The ancients did well, therefore, to invent gods and the belief in punishment after death."

Sagan recounted how the medieval church tortured and burned thousands of women on charges that they were witches who flew through the sky, copulated with Satan, changed into animals, etc. He said "this legally and morally sanctioned mass murder" was advocated by great church fathers.

"Inquisitional torture was not abolished in the Catholic Church until 1816," he wrote. "The last bastion of support for the reality of witchcraft and the necessity of punishment has been the Christian churches."

The astronomer-author equally scorned New Age gurus, flying saucer buffs, seance "channelers" and others who tout mysterious beliefs without evidence. He denounced the tendency among some groups, chiefly fundamentalists and marginal psychologists, to induce people falsely to "remember" satanic rituals they experienced as children.

Again and again, Sagan said that wonders revealed by science are more awesome than any claims by mystics. He said children are "natural scientists" because they incessantly ask "Why is the moon round?" or "Why do we have toes?" or the like. He urged that youngsters be inculcated with the scientific spirit of searching for trustworthy evidence, to guide them through "the demon-haunted world."

Related Topic(s): Belief; Evidence; Fear; Hoax; Punishment; Religion; Science, Add Tags
Add to My Group(s)
Go To Commenting
The views expressed herein are the sole responsibility of the author and do not necessarily reflect those of this website or its editors.