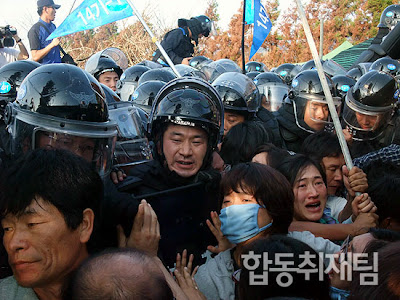 (Image by Unknown Owner)   Details   DMCA
The latest news is that this morning at 4:00 am the South Korean police (many in plain clothes) and military staged a massive raid of the Gangjeong village on Jeju Island. Sirens blared and villagers ran to the two construction gates to set up non-violent blockades. Many college students have come to join the villagers. By 9:00 am some number of Catholic Priests and 33 villagers and supporters have been arrested. More are likely to be taken to jail before this is all over.
Villagers are protesting against the construction of a naval base on their pristine island that will be used by the U.S. to port Aegis destroyers outfitted with "missile defense" systems.

It appears this raid was timed to try to "preempt" the major protest festival planned in the village this weekend where more than 1,000 are supposed to come including many from the mainland. The right-wing government is obviously going after as many of the leadership as possible in order to create organizational confusion and a sense of despair. But in times like this new leadership will emerge to keep things going.
Writing from South Korea Global Network board member Sung-Hee Choi, recently released after three months in prison for holding a banner, said, "We need international solidarity. Please protest against the South Korean authorities with letters, press interviews and others."

It is more than obvious that the South Korean government is returning to its previous form of military dictatorship - and sadly it appears to be under the encouragement of the U.S. government who wants more military bases there. The people of South Korea have grown weary of turning their lands over to the always greedy U.S. military whose appetite for more and bigger bases knows no end. All of this is of course actually aimed at "containing" and "managing" China.

The U.S. throws out the threat of North Korea to justify these moves on the chess board but this massive buildup is well beyond the point of dealing with the shriveling Korean government to the north. The real prize for the U.S. in this deadly and dangerous game of empire building is China.

UPDATE: I've had trouble emailing and faxing my letter to the South Korean embassy in Washington (they probably are intentionally blocking communications) so I went online and got the address for their consulates in New York, San Francisco, and Los Angeles and sent my letter there. You can find that contact info here

Related Topic(s): Catholic; Empire; Military; Navy; Protest, Add Tags
Add to My Group(s)
Go To Commenting
The views expressed herein are the sole responsibility of the author and do not necessarily reflect those of this website or its editors.