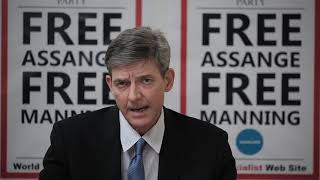 The Socialist Equality Party (SEP) and the International Youth and Students for Social Equality (IYSSE) in Sri Lanka are holding a public meeting in Colombo on January 2 as part of the Trotskyist movement's international campaign to free Julian Assange and Chelsea Manning.

WikiLeaks founder Julian Assange, who remains imprisoned in the UK's maximum-security Belmarsh Prison, is the victim of an internationally coordinated conspiracy by US, Britain and Australia. He is being persecuted for exposing the crimes of these imperialist powers. The brutal attack is not just directed against Assange but billions of workers and young people around the world who value freedom of expression and their right to know the truth.

The mainstream media globally, in line with their imperialist masters, are maintaining a conspiracy of silence despite mass support for Assange and courageous US whistleblower Chelsea Manning, who provided classified information about American war crimes to WikiLeaks. Manning has been jailed indefinitely in the US over her refusal to testify against Assange.

The media silence is being maintained despite "open letters" from 65 eminent doctors around world demanding Assange be provided proper medical care and from over 700 journalists internationally calling for his immediate release. United Nations Special Rapporteur on Torture Nils Melzer has warned that the extended persecution of Assange is tantamount to torture and that he could die in prison.

The US extradition case against Assange, who is an Australian citizen, will be heard in a British court on February 25. British authorities are undoubtedly conspiring to ensure that he is quickly extradited to the US, where he will be placed before a kangaroo court on bogus espionage charges and sentenced to more than 175 years in prison.

US imperialism and its allies are persecuting Assange and Manning as part of escalating anti-democratic attacks on freedom of the press and to intimidate mass anti-war sentiment and opposition to government austerity measures. The power of the international working class must be mobilized to defeat this reactionary assault on democratic rights.

We urge all workers, youth and all those who cherish democratic rights to oppose the attack on Assange and Manning and attend the SEP/IYSSE meeting in Colombo.

Related Topic(s): Chelsea Manning; Freedom; Julian Assange Imprisonment; Meeting; Persecution; Public Actions; Public Morality; Wikileaks, Add Tags
Add to My Group(s)
Go To Commenting
The views expressed herein are the sole responsibility of the author and do not necessarily reflect those of this website or its editors.