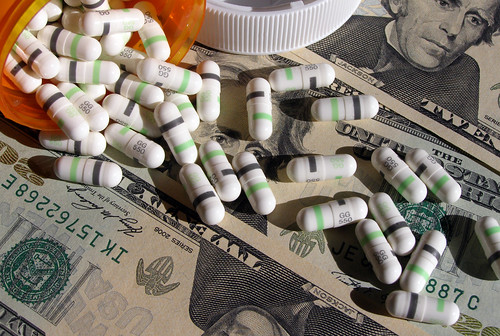 This article was co-written with Dean Baker*

Prescription drugs have long provided two bad examples of American exceptionalism. They cost 3-to-4 times more than anywhere else, and we're one of only two countries in the world that allows prescription drug advertising to consumers.

Far better to be like everybdy else. Americans deserve drug prices in line with those in other countries. They don't deserve a constant barrage of confusing and misleading ads.

Advertising is the lesser of two evils and the simplest to counter: just stop it already. Important voices have already made that recommendation.

TV commercials for prescription drugs always tell consumers to "ask your doctor." But the companies that pay billions to run the ads aren't listening to doctors. For the last five years, the American Medical Association has called for a ban on direct-to-consumer advertising of such drugs.

Here's what the drug makers are ignoring: "[The AMA's] vote in support of an advertising ban reflects concerns among physicians about the negative impact of commercially-driven promotions, and the role that marketing costs play in fueling escalating drug prices".Direct-to-consumer advertising also inflates demand for new and more expensive drugs, even when these drugs may not be appropriate."

New Zealand-the lone other country that permits such advertising-could soon disallow it. A large majority of New Zealanders favors a ban, and one might be included in a bill now being considered. Its passage would make America truly exceptional in a truly drugged up way.

Cutting drug prices presents a bigger challenge than cutting out drug advertising, but the rewards would be huge.

Americans will spend over $500 billion on prescription drugs in 2020 (more than 2.2 percent of gross domestic product). The basic research underlying these drugs is almost always carried out with taxpayer dollars at university or government research labs, mostly through the National Institutes of Health.

The research findings used to stay in the public domain, available to any company that wanted to use them. In 1980, the bipartisan Bayh-Dole Act made a watershed change: it allowed for the rights to be turned over to private parties.

While the point of Bayh-Dole was to hasten the harnessing of basic research, it also sent the price of drugs soaring. Spending on prescription drugs had been largely stable at around 0.4 percent of GDP from 1960 to 1980. In the decade after Bayh-Dole it had doubled to 0.8 percent and it doubled again in the next decade.