Just in time for Easter, Bryan Fischer talks about bunnies and black people, while exhibiting a bit of penis envy and eliciting boredom. 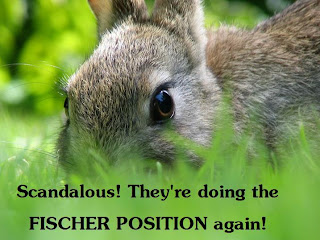 "Welfare has destroyed the African-American family by telling young black women that husbands and fathers are unnecessary and obsolete. Welfare has subsidized illegitimacy by offering financial rewards to women who have more children out of wedlock. We have incentivized fornication rather than marriage, and it's no wonder we are now awash in the disastrous social consequences of people who rut like rabbits." - American Family Association spokesbigot Bryan Fischer

We all know that Bryan I-am-not-a-hate-group Fischer hates gays, native Americans, immigrants, and feminists, so his comment about African-American welfare moms should not be surprising. His timing, however, may be a bit off, unless his intention was to equate Easter's Peter Cottontail with a deadbeat dad.

One problem with Fischer's statement is his passion for the prurient: for someone so seemingly virtuous, he dwells on the subject of sex more than Howard Stern. In fact, Fischer reminds me of John Powers' character, Felix the Filth Fiend Lindor,* who "had enough dirt in his mind to apply for statehood." I could start on the subject of penis envy, but don't have the space or the time. Suffice it to say Fischer's compensating: every group/stereotype that he targets has more sex than he could ever dream of. Encouraging sex of any kind reminds him of his shortcomings as a straight white male.

Another problem is that his sociopathic tendencies are so strong you wonder if he has actually liked anyone in his past. Even he admits that he is the real reason the Southern Poverty Law Center labeled the American Family Association a hate group. Ever the iconoclast, he eschews the rules of hunting his wild enemies in a group, choosing to target whole groups by himself: gays, feminists, Native Americans, African Americans, progressive Christians.

Now his prey is the African American welfare mom: "we have incentivized fornication." The only thing new about Fischer's philosophy is the word "incentivized" - it's not in any dictionary, but Fischer needed to sound scientific in his rant. Unfortunately, the debate about welfare moms has been around for decades and not even Ann Coulter has come up with anything new.** Ever the chauvinist, Fischer never once mentions shiftless deadbeat dads or abusive husbands - those jerks the welfare moms never want to see again. They are left in the shadows (but are more real than all the fictional gay black men who lure them away from fatherhood). Meanwhile, Fischer drums away at the economic drain upon good, virtuous family-values (and obviously sexless) Christians.

When reports of his racist comments caused some stir in the internet media, he shot back:

I was commenting on the effect of our misguided welfare policies across the board, and was not singling out the African-American community in particular, although the consequences of our disastrous welfare policies are felt most acutely there. I was speaking generally to the fact that fallen human nature is going to gravitate to whatever behavior government rewards, even if the behavior itself is self-destructive.

The American Family Association edited his initial remarks, removing the "rut like rabbits" end and replacing it with " engage in random and reckless promiscuity, whether they are Caucasian, Hispanic, or African...Because we are subsidizing fornication and illegitimacy - every illegitimate baby means more taxpayer money for the mother."

In other words, "we're pro-birth and not pro-life, after your illegitimate brat is born, you pay for it."
Hateful humdrum: Fischer is teetering on the brink of irrelevancy, but doesn't seem to care. He thinks that hosting Presidential hopefuls and cartoon characters like Rick Santorum will carry his show over the next several years. It might not.
Bryan Fischer is in a rut.

** While hawking her latest book on The View, Coulter expounded upon the subject by stating that almost all illegitimate children wound up becoming criminals.

Rev. Dan Vojir is has been writing/blogging on religion and politics for the better part of ten years. A former radio talk show host (Strictly Books " Talk America Radio Network) and book publisher, Dan has connected with some of the most (more...)
Related Topic(s): African Americans; American Family Association; Bryan Fischer; Easter; Penis; Rabbits; Sex; Welfare, Add Tags
Add to My Group(s)
Go To Commenting
The views expressed herein are the sole responsibility of the author and do not necessarily reflect those of this website or its editors.