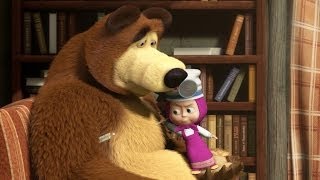 Masha and The Bear
(Image by YouTube, Channel: Get Movies)   Details   DMCA

You couldn't ask for a better propaganda expose'. British media this week ran reports claiming that a Russian-made cartoon for children was being stealthily used by the Kremlin to indoctrinate young minds.

But it's not Russia that was exposed. It's the British -- and by extension the rest of Western media and their outlandish anti-Russian "campaigns."

We're talking about the internationally acclaimed animation "Masha and the Bear," which is wildly popular among children and even adults around the world. Translated from the original Russian into 36 languages, the exquisitely funny cartoon is viewed in 120 countries.

It tells the tale of a tiny mischievous girl who is befriended by a big bear and lots of other forest animals.

I'd love to win for my daughter Amy! She is my very own Masha, and she absolutely loves to watch Masha and the bear 🐻 (shhh don't tell anyone, but I love to watch it too 😎) pic.twitter.com/MqTypN7NRB

Yet here we have the London Times and other British media outlets publishing articles this week that -- seriously, not tongue-in-cheek -- claim the cartoon is "soft propaganda" for the Kremlin to "subvert children."

The Daily Mail says the animation, which is based on Russian folklore, has "drawn the ire of intellectuals in Russia's bordering states." That's because the cartoon "places a positive image of Russia in children's minds."

How dare the Russians do that! A positive image? Maybe Russia should burn all its famous literary works, turn the Kremlin palace into rubble and never, ever hold the football World Cup again.

One of the "intellectuals" cited is a Professor Anthony Glees from Buckingham University, in England, who describes the little girl character in the cartoon, Masha, as being "Putinesque" because she is "plucky and feisty."

The British media reports were lambasted by the Russian embassy as "pathological Russophobia."

An important issue raised by @thetimes today: How UK can find salvation from "Masha and the Bear"? Launch an Ant-Cartoon Excellence Centre somewhere in the Baltic? Place all cartoonists on EU sanction list? Clearly a decisive -- and a very expensive -- approach is needed! pic.twitter.com/a05fKE24Be

The Moscow-based producer of the cartoon said it was difficult to muster a serious comment, but with a touch of irony, thanked the British media for free advertising given to their show which will no doubt boost its worldwide following even more. For the record, the producer company, Animaccord, is listed as an independent Moscow-based business -- which is not funded by the Russian state.

Related Topic(s): Child Abuse; Interpol; Kremlin; Propaganda; Russophobia, Add Tags
Add to My Group(s)
Go To Commenting
The views expressed herein are the sole responsibility of the author and do not necessarily reflect those of this website or its editors.