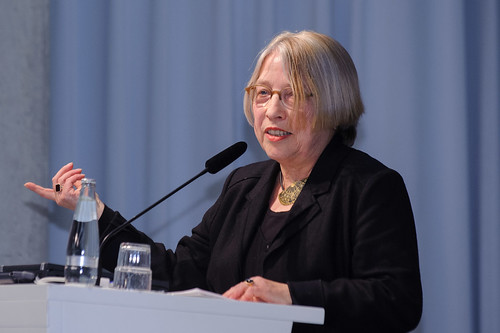 [The following is a translation from German by Google and me of this page from NachDenkSeiten.de. The interview was conducted by Marcus Klöckner.]

Anyone talking with Antje Vollmer quickly realizes that she is no alarmist, but an experienced politician. Vollmer, who has a doctorate in theology, was Vice President of the German Bundestag from 1994 to 2005 and repeatedly a Green member of Parliament. But what has been happening lately worries her greatly. The cornerstones of detente, set in place by politicians of the old Federal Republic to avoid a war with Russia, have been destroyed by the post-reunification elites. She wants an open discussion of the value of the policy of detente as practiced by Willy Brandt and others, as opposed to the new German hard-line policy towards Russia.

The following interview was preceded by two public appeals by Vollmer and other well-known personalities from the realm of politics, business, and culture. In December 2014 the message, with more than 60 signatories, was: "War again in Europe? Not in our name!" But the appeal had little effect.

Then, on April 12 of this year, Vollmer made another public appeal, together with Gunter Verheugen (SPD), Edmund Stoiber (CSU), Horst Teltschik (CDU) and Helmut Schäfer (FDP), warning of the imminent danger of "a third and final world war." But except for the Frankfurter Allgemeine Zeitung, no other media outlet published the statement.

Are we facing a Third World War, Ms. Vollmer?

"We are facing an extremely tense situation between the West and Russia. In this situation, minor events or misinterpretations of events can lead to further escalation, which -- and this is the great danger -- can no longer be controlled by anyone. I believe that a false threat analysis can be just as dangerous as a real threat."

Can you explain that?

"We see both sides building up a picture of the 'enemy.' This is driven, sometimes hysterically, by the media. And in fact the armed forces are being constantly built up, both militarily and verbally. With this mixture, the effect of even minor events or confrontations can no longer be calculated, especially since most of the structures for discussion are no longer being used."

You are an experienced politician. How do you think we got to this critical situation with Russia? There must have been some signs along the way. It did not happen overnight.

"I think there was a fundamental change in German foreign policy at the turn of the millenium, or in 2005 at the latest."

What do you mean?

"The revolutions of 1989 and the fall of the Iron Curtain made the West feel victorious and encouraged some to dream of further regime changes worldwide. The role of detente, and of the considerable contributions of the Soviet Union to the miracle that these changes occurred largely non-violently in Europe, were gradually forgotten."

For the second time now, you and other well-known people have made a public call for better relations with Russia.

"Yes, in 2014 it was due to the Ukraine crisis. Over 60 prominent people signed that statement. I cannot remember anything similar. A former president, a former chancellor, various cabinet ministers and state governors -- all from the most diverse political parties -- and also well-known people representing the arts, culture, churches, trade unions, and agricultural organizations. We were warning then, urgently, that the threat of war in Europe was real, and not just a phenomenon from the past."

What was the reaction?

"It was not taken seriously. The media invented the label "Russian sympathizers" ["Russland-Versteher"] for us. The major TV networks ARD and ZDF did not report it at all. We went first to the Sueddeutsche Zeitung, but they obviously missed the whole point since they refused to print it or even report it as a news story."

Related Topic(s): Conflict; East Germany; Internet; Journalism; Media; Parliament; Peace; Propaganda; Reunification Of Germany; Russia And Germany; (more...) Sanctions; Sanctions; Skripal; Vladimir Putin, Add Tags  (less...)
Add to My Group(s)
Go To Commenting
The views expressed herein are the sole responsibility of the author and do not necessarily reflect those of this website or its editors.