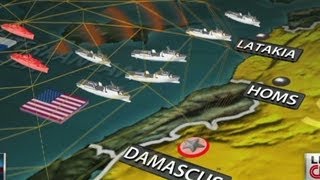 Syria is bracing for a U.S. attack and the Russians are helping the Assad government.
(Image by YouTube, Channel: CNN)   Details   DMCA

Something rather unprecedented just happened in Syria: US backed "good terrorist" forces attempted a surprise attack against Syrian government forces stationed to the north and northeast of the city of Hama. What makes this attack unique is that it took place inside a so-called "de-escalation zone" and that it appears that one of the key goals of the attack was to encircle in a pincer-movement and subsequently capture a platoon of Russian military police officers deployed to monitor and enforce the special status of this zone.

The Russian military police forces, composed mainly of soldiers from the Caucasus region, fought against a much larger enemy force and had to call for assistance. For the first time, at least officially, Russian special operations forces were deployed to rescue and extract their comrades. At the same time, the Russians sent in a number of close air support aircraft who reportedly killed several hundred "good" terrorists and beat back the attack (Russian sources speak of the destruction of 850 fighters, 11 tanks, three infantry fighting vehicles, 46 armed pickup trucks, five mortars, 20 freighter trucks and 38 ammo supply points; you can see photos of the destroyed personnel and equipment here). What also makes this event unique is the official reaction of the Russians to this event.

"Despite agreements signed in Astana on September 15, gunmen of Jabhat al-Nusra and joining them units that don't want to comply with the cessation of hostilities terms, launched a large-scale offensive against positions of government troops north and northeast of Hama in Idlib de-escalation zone from 8 am on September 19 (...) According to available data, the offensive was initiated by American intelligence services to stop a successful advance of government troops east of Deir ez-Zor."

Today, other Russian officials have added a not-so-veiled threat to this accusation. The Russian Defense Ministry's spokesman, Major General Igor Konashenkov has declared that:

"Russia unequivocally told the commanders of US forces in Al Udeid Airbase (Qatar) that it will not tolerate any shelling from the areas where the SDF are stationed (...) Fire from positions in regions [controlled by the SDF] will be suppressed by all means necessary."

This is unprecedented on many levels. First, the Russians clearly believe that this attempt to kill or capture a platoon of the Russian military police was planned by the United States. The fact that they are making this accusation officially shows the degree of irritation felt by the Russians about the duplicity of the Americans.

Second, this is the first time, at least to my knowledge, that Russian Spetsnaz forces had to be sent in to rescue a surrounded Russian subunit. All Spetsnaz operators survived, but three of them were wounded in the operation (the Russians are not saying how badly). The close air support by very low flying SU-25 aircraft was obviously coordinated by Spetsnaz forward air controllers and probably saved the day. In other words, this was a close call and things could have ended much more badly (just imagine what the Takfiri crazies would have done, on video, to any captured Russian serviceman!).

Finally, a US-organized attack on what was supposed to be a "de-confliction" zone combined with an attempt to capture Russian soldiers raises the bar for American duplicity to a totally new level.

The big question now is "do the Russians mean it?" or are they just whining with real determination to hit back if needed.

There are a couple of problems here. First, objectively, the Russian contingent in Syria is a tiny one if compared to the immense power of CENTCOM, NATO and the ever-present Israelis. Not only that, but in any US-Russian confrontation, Russia as a country is objectively the weaker side by any measure except a full-out nuclear exchange. So the Russians are not in a position of force. Furthermore, for historical and cultural reasons, Russians are much more concerned by the initiation of any incident which could lead to all-out war than the Americans who always fight their wars in somebody else's country. This might seem paradoxical, but the Russians fear war but they are ready for it. In contrast to the Russians, the Americans don't fear war, but neither are they ready for it. In practical terms this means that an American miscalculation could very well lead to a Russian military response which would stun the Americans and force them to enter an escalatory spiral which nobody would control.

Remember how Hillary promised that she would unilaterally impose a so-called "no-fly" zone over Syria? She promised not only to deploy US aircraft above Russian forces in Syria, but she also promised that she would force the Russian Aerospace forces out of the Syrian skies. Thank God, this crazy witch was not elected, but it appears that folks with the same arrogant and, frankly, completely irresponsible point of view are now back in power under Trump.

My fear now is that the incompetent, arrogant, not too bright and generally ignorant commanders at the Pentagon and the CIA will simply ignore clear warning signs coming from the Russians, including the public announcement that the Kremlin has given the authority to use force to protect Russian personnel to the local Russian commanders in Syria. In plain English, this means that if they are attacked the Russians in Syria do not need to consult with Moscow before using force to protect themselves. By the way, such rules of engagement are pretty common, there is nothing earth shattering here, but the fact that they were made public is, again, a message to the AngloZionist and the "good" terrorist they use to try to conquer Syria.

This time around we (the world) were lucky. The Syrians fought hard and the "good" terrorists were probably surprised by the ruthless determination of the Russian military police forces (in reality, mostly Chechen special forces) and of the Spetsnaz operators. It is one thing to fight Syrian conscripts, quite another to deal with these hardened warriors. But the next time around the outcome could be different.

Related Topic(s): Pentagon; Russian Foreign Policy; Russian Military Strategy; Syrian Situation, Add Tags
Add to My Group(s)
Go To Commenting
The views expressed herein are the sole responsibility of the author and do not necessarily reflect those of this website or its editors.