The Tsar was not the only tyrant in the world; Capitalism was worse.
---John Reed, Ten Days that Shook the World 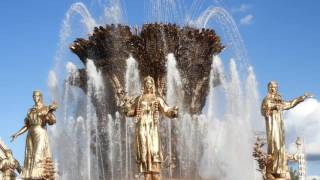 I just came home to California from a 50-person citizen diplomacy delegation to Russia to ponder my neighbor's bumper sticker that says "Just pretend it's all OK." That's the American state of mind, but it doesn't extend to Russians, who are painfully aware of war and its death and destruction. The still pervasive images of wheat in the cities and towns reflect the necessity of feeding the people. The US unapologetically operates on the principle that war is good for business. Russians know war too deeply to accept that premise.

Russians call WWII the Great Patriotic War because of all the allies, they lost the most people (27 million) by a wide margin and fought the longest to defeat the Nazis. The siege of Leningrad lasted an almost incomprehensible 900 days. There is a visceral understanding of war in Russia, while in the US war is so sanitized that the corporate media is forbidden to show coffins draped in American flags. 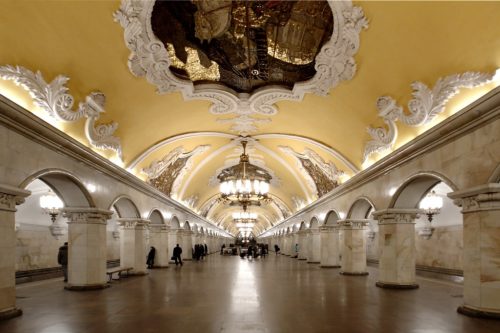 Though some Soviet accomplishments have been erased, many remain. Subways, designed by the Soviets to be underground "Palaces of the People," are filled with exquisite art. People told us that in the Soviet era, the collective and state farms, a major feature of the USSR's socialist economy, worked well, ending a thousand years of frequent famines in the Russian empire. In a short time, Russia became one of the most educated, and well-read countries in the world. And Russians are well aware that Stalin led the USSR in the defeat of the Nazis.

In Moscow, a number of scholars and specialists in economics, history, media and political science spoke to us and answered questions. One, a young political scientist, asked the group a critical question: Why didn't the US befriend the Russians when the Cold War ended? Nobody responded, so I asked 83-year old Sharon Tennison, the founding and continuing torch of the 32-year old Center for Citizen Initiatives, why. She said: It's because the US went back on its word and took advantage of Russia's goodwill, and underneath had the Wolfowitz Doctrine in mind. [Leaked to the NYT in 1992, the Wolfowitz Doctrine was a policy of unilateralism and pre-emptive military action to suppress potential threats from other nations and prevent any other nation from rising to superpower status.] This was their chance to get Russia's resources, and not live up to their word. It went from bad to worse after that! The Russians know this better than Americans.

Dr. Vladimir Kozin, a distinguished expert in military and strategic sciences, delivered a terrifying report of the state of nuclear disarmament. He spoke chillingly of the death of arms control, while we are in "Cold War 2.0." Of the 13 arms control treaties, the US has withdrawn from, violated, or refused to debate all of them. Differences between offensive and defensive weapons are being watered down. Russia has destroyed all of its chemical weapons; the US has not. Kozin is surprised that Americans are not afraid of nuclear war. Fifty two percent of Russians are afraid of nuclear war, and 74% of those think the US will attack them. He said instead of promoting MAD (Mutually Assured Destruction), we need to promote MAS (Mutually Assured Security), but that stability and security talks haven't even begun.

Vladamir Pozner, Russia's top TV journalist, spoke of the Russian people's disillusionment with the promise of nuclear disarmament. They wonder if it was just a pipe dream when Kruschev spoke of total global disarmament and when Gorbachev proposed a Zero Use policy for nuclear weapons.

There was much talk about the effect of the sanctions the Obama administration imposed on Russia; first for its reunification with Crimea, then for the charge, since disproven, that Russia colluded with Trump. The sanctions are hurting Russia, but they have also stimulated a better business climate. They are focused on national security priorities, including improving agricultural production. Everybody expects more sanctions to come soon, which many people believe benefits China. Some from the Gorbachev era apparently think it's better for Russia to align with the US and NATO than China, but the success of the Belt and Road Initiative shows that cooperation among Asian countries is increasing. The unipolar world of US exceptionalism, a rogue state, where the rules don't apply is being challenged.

Financial analyst Chris Weafer said the Russian state controls 60% of the GDP and 75% of the banking system. Several of the state-owned banks forbid speculative lending. Because so much of the banking system is in the public sector, the government has capital to work with, much of it going to domestic needs. He reported that Russia has an excellent balance sheet, with the world's sixth lowest debt and the fifth highest in reserves.

Weafer described Putin's proposed National Projects, which is a five-year plan using 22% of the GDP, with 30% funding for economic infrastructure and 30% funding for social improvements, such as subsidies for housing and childcare. The government is also allocating significant funds for health care generally, as well as cancer research specifically. A major Project goal is energy development for the country to be less reliant on fossil fuels, so less vulnerable to volatile oil prices. Weafer believes the National Projects are "concrete, beneficial and likely to succeed," though it's expected to take a bit longer than five years to achieve.

He said that Putin, upon coming to power, told the oligarchs (the ultra-rich who use their money for political power) that if they pay their taxes and stay out of politics, he wouldn't prosecute them. Apparently he was true to his word and prosecuted only those who violated that policy. He told the oligarchs that they got rich off the state, so it's not all their assets, and some of it must go to the state as taxes to use for the people. After the recent fires in Russia, Putin declared that no business could increase their prices, so nobody benefits off the tragedy. There are still civil servants from the Soviet period who influence such policies.

Dmitri Babich is known to those who watch "Crosstalk" on Russia Today. He is a 25-year journalist with stints at the Moscow News and Sputnik International, and is a frequent guest on BBC, Al Jazeera and CNN.

"Currently there is only a small group of Western critical journalists," Babich said. "If journalists are against the mainstream position, they are called Putin-sympathizers." He called the annexation of Crimea an "act of ultimate justice," as they all speak Russian, and asserted that the "modern media can operate without facts, just the power of illusion."

As to the power of illusion, Andrei Nekrasov, a dissident filmmaker, spoke of Hillary Clinton comparing Russia to the Third Reich and Putin to Hitler. Such vilification impedes progress towards a peaceful resolution of disputes, to say the least, which the Russians are quite aware of.

After over 300 years of being part of Russia, in 1954 Khrushchev "gave" Crimea to Ukraine. For 23 years (from the breakup of the Soviet Union to the vote for reunification, 1991-2014), Ukraine provided no support or help, economically and culturally. The Commission for the 2014 referendum to reunify with Russia declared that final results showed 96.8% of voters were in favor of joining Russia, and that they had not registered a single complaint about the vote. However, President Obama imposed sanctions against Russia for accepting Crimea into the Russian Federation, including visa bans and asset freezes. Putin told Obama the vote was "fully consistent with the norms of international law and the UN charter" under the principle of self-determination. Agreeing with Putin, in 2015, Consortium News founder Robert Parry asserted:

Riva Enteen edited the book Follow the Money, interviews by Flashpoints producer Dennis J. Bernstein. She can be reached at rivaenteen@gmail.com
Related Topic(s): Education; Gorbachev; Putin; Russian Diplomacy; Russian Economy; Wheat, Add Tags
Add to My Group(s)
Go To Commenting
The views expressed herein are the sole responsibility of the author and do not necessarily reflect those of this website or its editors.

Russian Pride and US Exceptionalism